After finishing the bike tour yesterday I wandered around the corner to the TV tower to go to observation deck. I could get a fast pass ticket for 5.45pm, which was three hours away, so I bough that (€19) and then headed over to the DDR museum to do that whilst I waited.

The DDR museum entry was by the river below street level, it took me a few minutes to find it. Google maps was telling me I was in it, yet I couldn’t find it. I eventually found the sign that said I needed to go downstairs to get to the museum. There was a small queue which took a few minutes. I guess queuing for the DDR museum is kind of culturally appropriate considering if you lived in the DDR you had to queue for everything.

The museum isn’t that large, but they have a lot of things crammed into it. Its a kind of split between what life was like in the DDR including the survelience with the stasi and a nostalgic look back at DDR products and that were available at the time for people who lived in East Germany. Something like 1 in 6 people were spies for the East German police and almost everyone in the DDR had a police file on them. Next time I’m here I will visit the Stasi museum. 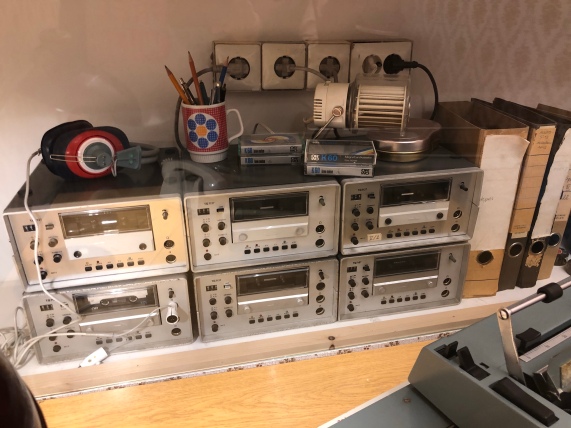 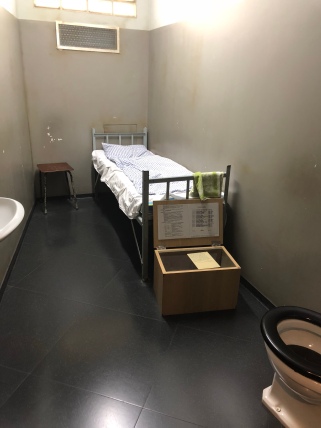 The Ampelmännchen (traffic light man) is mentioned a few times. From a design point of view its a unique icon, but functionally I think the red sign is a bit of a failure, from a distance it looks like a fat red cross, not a man. Initially I wasn’t sure if the light was intended for pedestrians or for traffic, as France has a skinny red cross on its traffic signals to indicate the lights for traffic going the opposite way are red. There is even a chain of stores in Berlin that sell Ampelmännchen merchandise. It is quite unique. 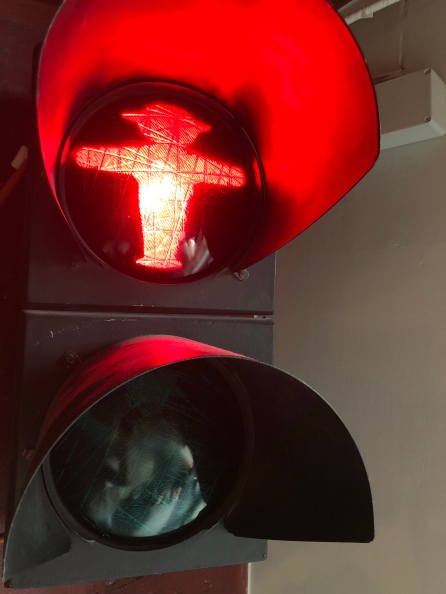 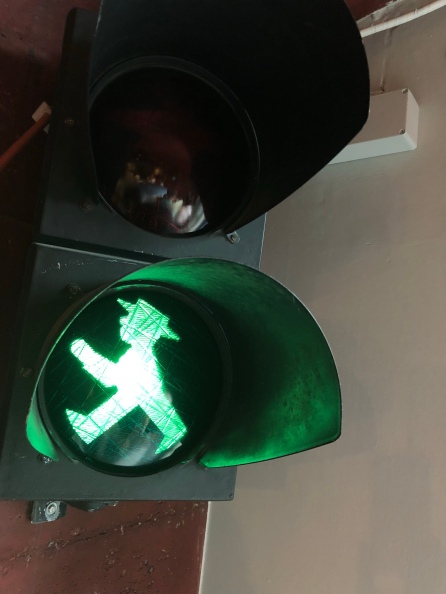 I think one of the most interesting antidotes about life in the DDR was that things were always in short supply and although no one starved, during the chernobyl crisis in 1986 the soviet union and other eastern states couldn’t sell their fresh produce onto western markets due to the contamination so they were dumped in East Germany and for a while there was a rare abundance of produce available. 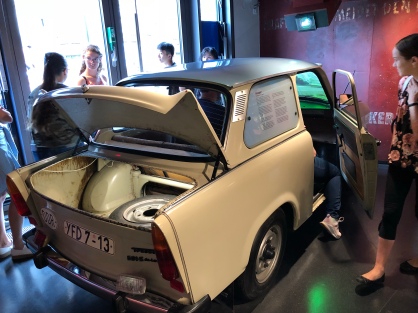 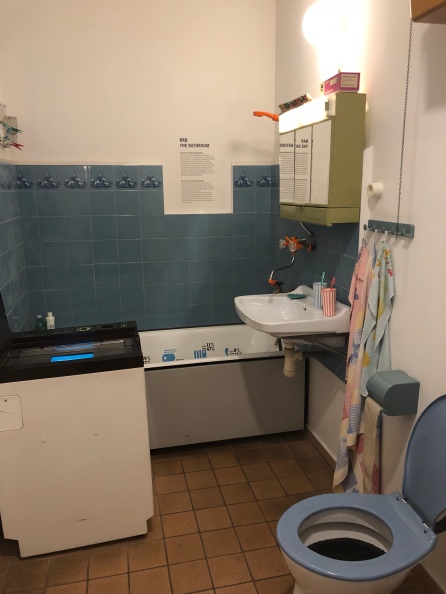 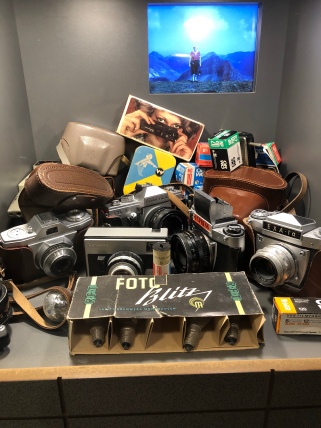 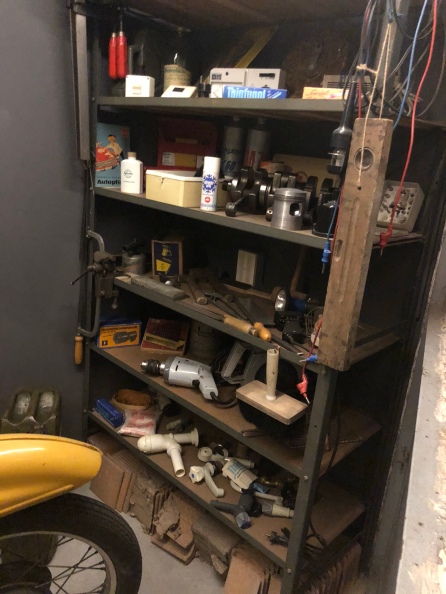 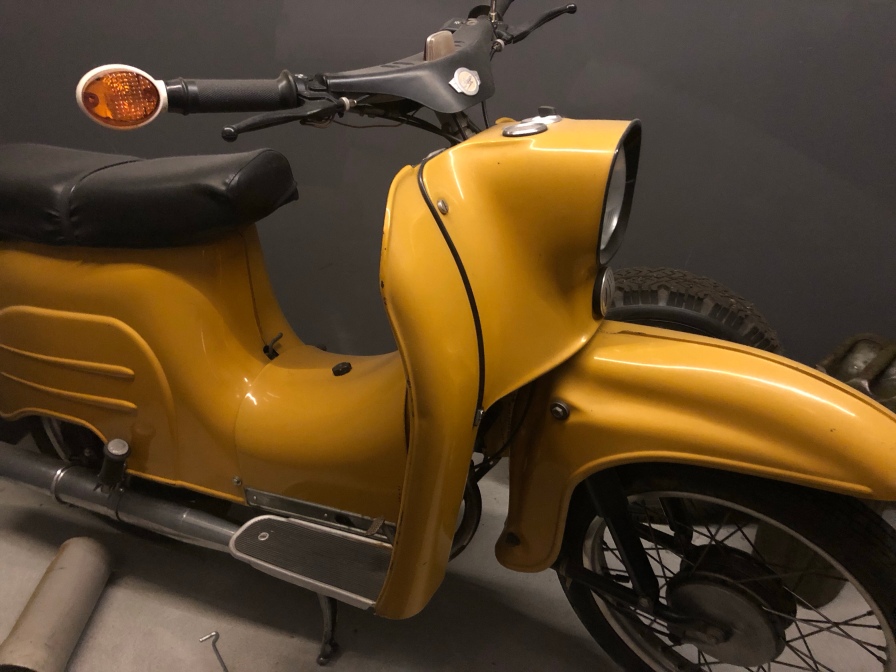 When I left the museum it was rather warm again so I stopped for a rest in a “starbucks like” cafe for a cold iced coffee mocha and caught up on some of my blogging whilst I was there and waited a while for my fast pass into the TV tower to become valid.

The TV tower (Ferneshturm) is one of the tallest structures in Europe at over 350m, but the observation deck is at the 202 metre mark which makes it considerably lower than most of the “tall” buildings in Europe now such as the Shard in London. At the top they have a revolving resturant, bar and the observation deck. It was a clear afternoon so visibility was quite good. The TV tower was both a political symbol and technical necessity as the DDR was only allocated 2 TV frequencies so they had to have a large tower to broadcast from one place. They have kept some of the DDR design queues and its very retro inside. If you look up when in the lift you can see the central core of the building that the lift moves through. 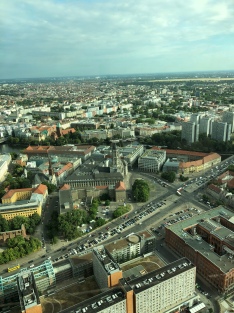 It was around 7pm when I finished in the TV tower so started to think about dinner. I hadn’t tried an full Curry-wurst yet, so I googled for the best Currywurst in Berlin, and in the top 10, the 3rd best was less than a kilometre away, right next to the S-Bahn station and on the way back to my hotel. It was at Curry61. They say necessity is the mother of all invention and this is the case of Currywurst. With the short supply of food after the war, Herta Heuwer made a sauce from tomato ketchup and curry powder an poured it over boiled then fried pork sausage. Its delicious in its simplicity. I tired the most traditional version I could get.This was accompanied by a Berlin Pilsner. I couldn’t leave Germany without having at least one German beer. 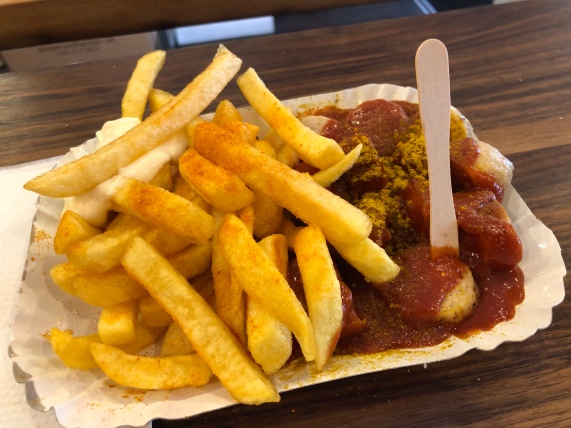 In the morning I’m leaving for Prague so once I was back at the Berlin HBF (main station) I checked where my train would be leaving from in the morning (platform 1) and picked up some fruit and yoghurt to have in the morning. I was hoping the pretzel place would be open so I could get a breakfast pretzel again (they are very delicious) and a standard pretzel for the journey as I hadn’t had one of those yet either.