Today was yet another horrible wet windy and cold day, at least we had planned in door things…

We first stopped for Coffee at the little Brazilian Cafe next the the hotel. Today really is the polar opposite of what Brazil would be. The warm coffee was very welcome. I’m still surprised at how lucky I’ve been with the good coffee so close to the hotel. If only we were so lucky with the weather.

We headed off to the Rijksmuseum, which is really easy for us to get to using the number 12 tram which leaves directly from the front of our hotel and stops directly opposite the museum.

I was really surprised how much I enjoyed the museum. Found some really interesting things. The main attraction is Rembrandt’s “The Night Watch” which as far as popularity goes, is the Dutch equivalent to the Mona Lisa in the Louvre, except it’s about 100 times bigger.

Most normal art lovers would be disappointed today as the art work was sealed off and had a big scanner in front of it. The museum are scanning the picture at the millimetre by millimetre level to analyse how to clean the painting and to see how it was constructed. Being a super tech geek, I thought this was amazing and chatted with one of the staff who showed me some of the things the scanner was finding

Scanner in font of the painting :-

3D vision of part of the scan, showing the paint details at millimetre level. They are also analysing the exact contents of the paint. 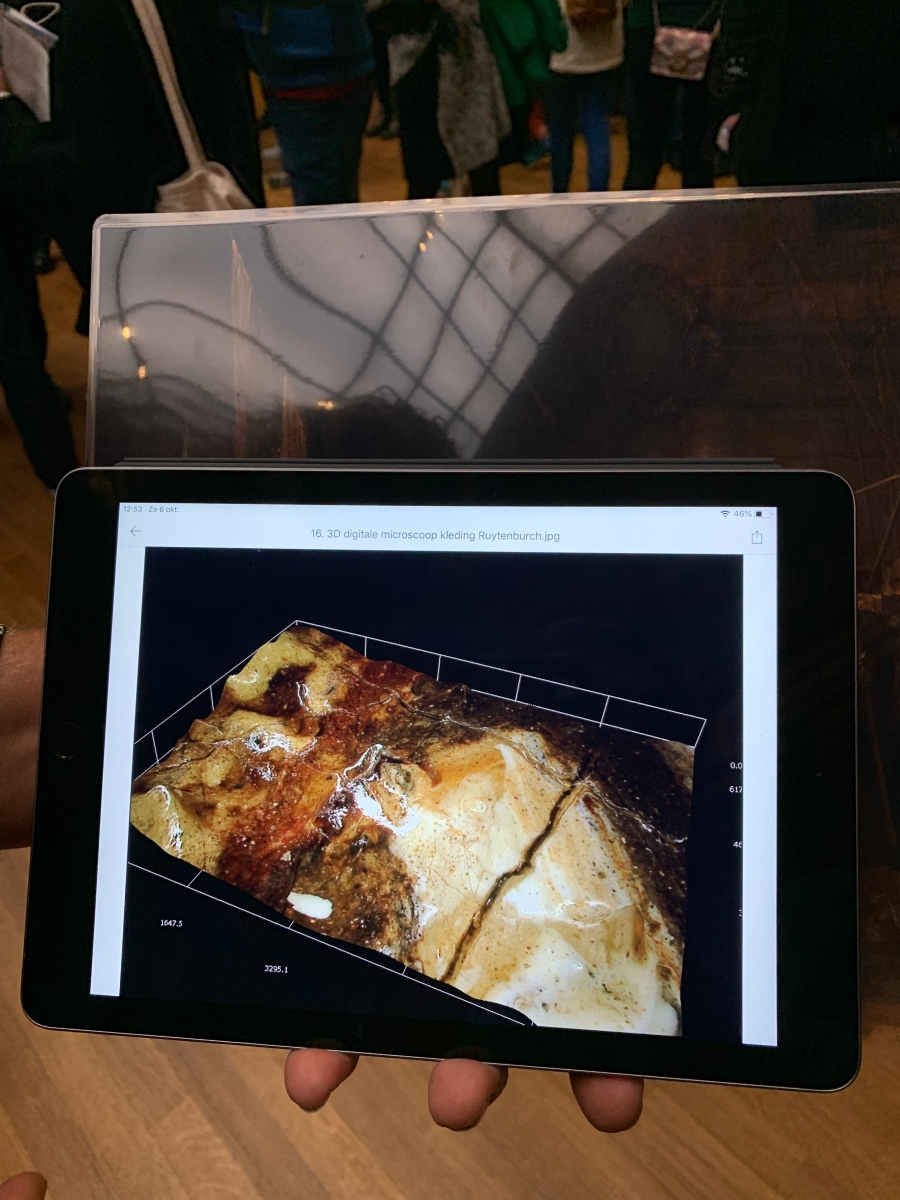 So just how many people are looking at the art here today ? 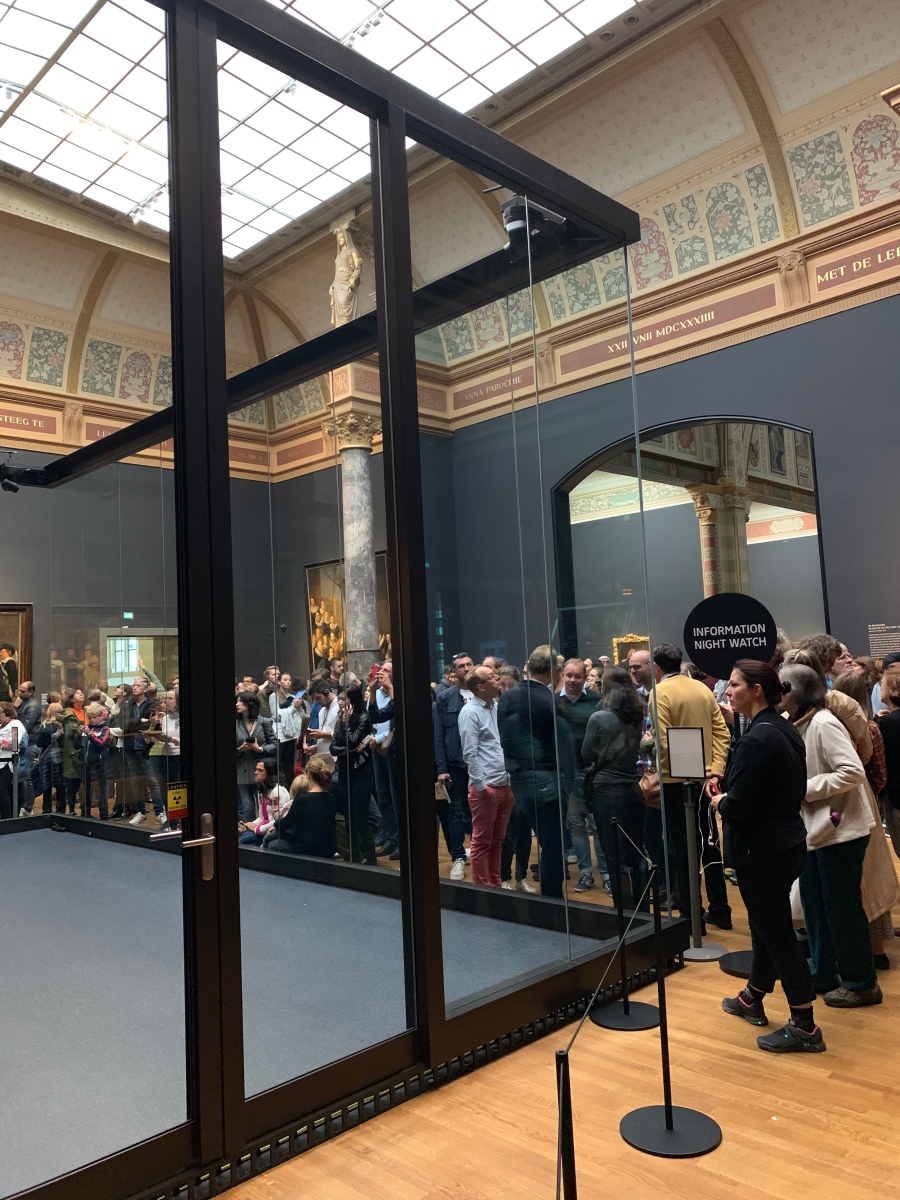 The Rijksmuseum have an App you can download. On a whim I searched “Australia” and the following will be obvious to any kid of the 60s or 70s who studied the explorers of “Australia” or should I say “New Holland” 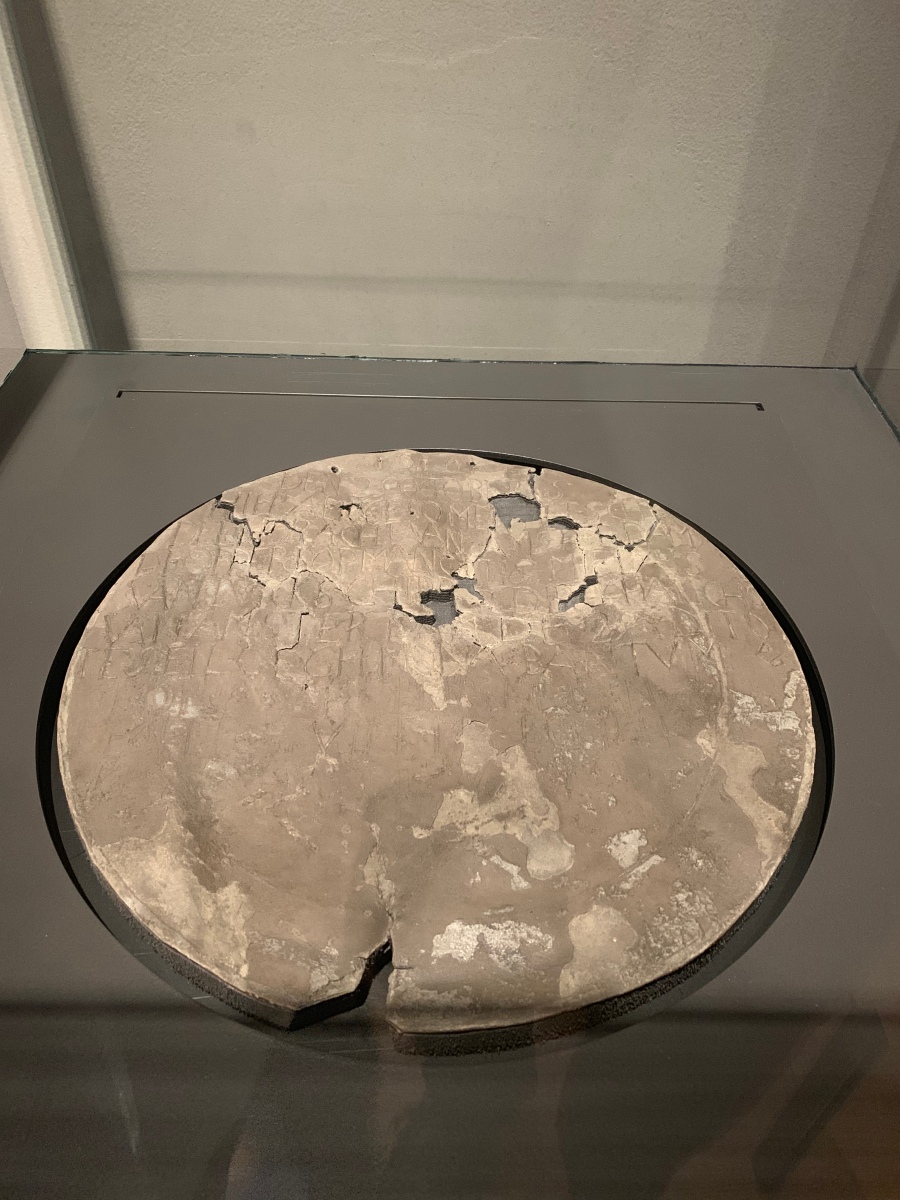 Yes, it’s actually the real Pewter plate Dirk Hartog nailed to a stick on an Island off Shark Bay when he “discovered” Australia. Apparently they don’t teach this in the current primary school curriculum.

Here it is up close. It’s seen better days…. 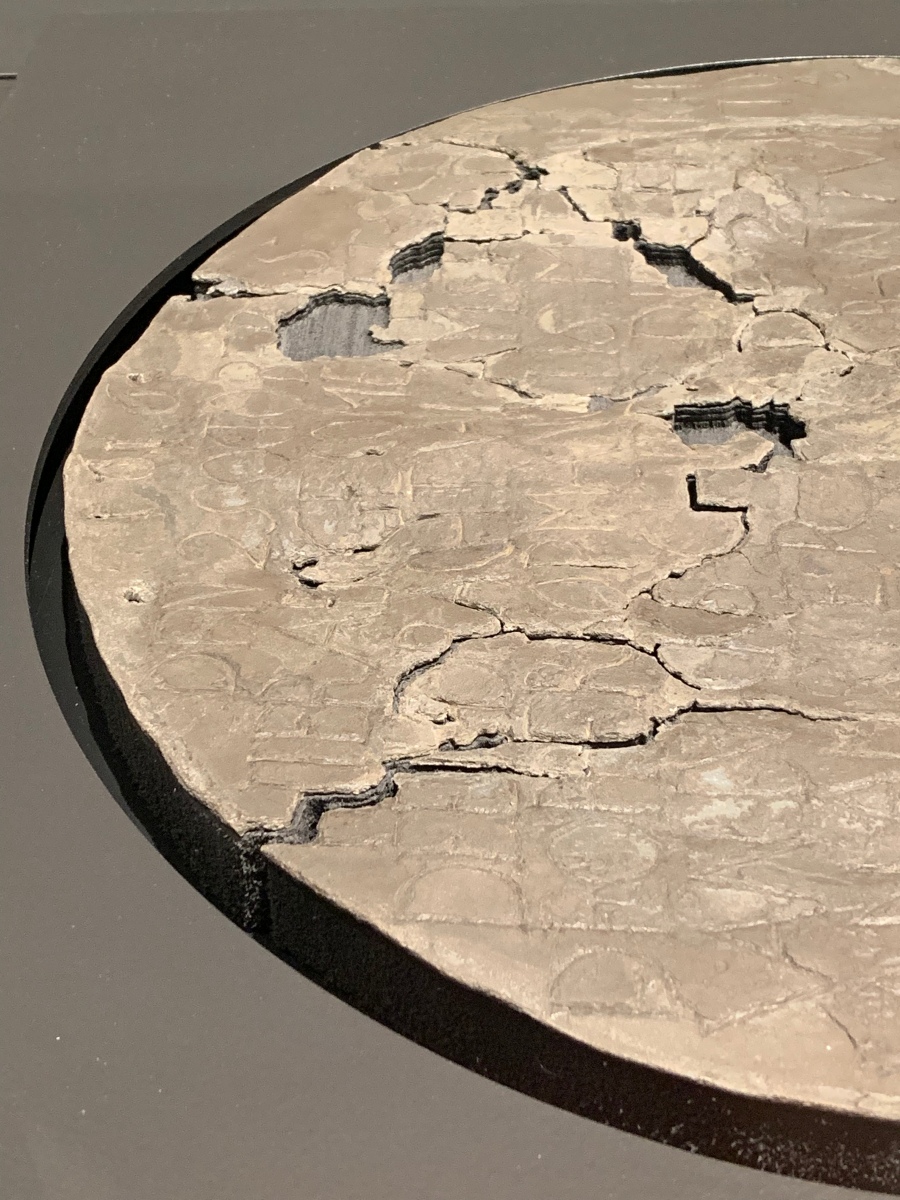 We also had a look at the Delft ware collection. Apparently this (unplayable) violin was considered the height of the design skill

There were some plates with interesting designs to suit all tastes. I could spend hours inventing witty captions for this picture

The museum has a lot of exquisite dolls houses from the 17th century, (these were not toys) so it’s given historians an excellent example of what items were in 17th century (well to do) houses 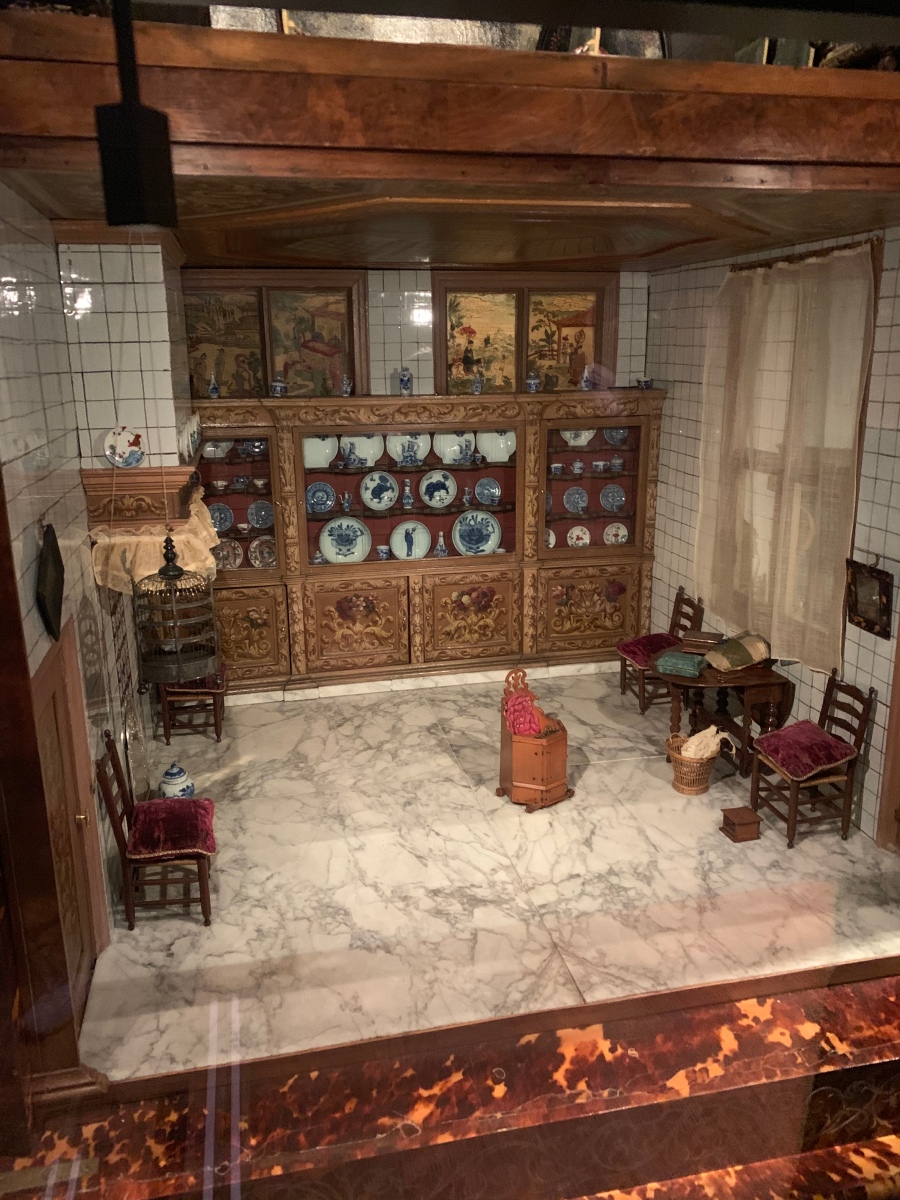 So you are considering travelling to Amsterdam during the off season to avoid the crowds? I don’t advise it. There might be less people overall, but all of them are trying to use the cloak room to drop off their jackets at the same time. This isn’t something you need to worry about in summer. Check out the picture below, I wasted 30 minutes on both drop off and pick up here

Ahh, but the restaurants and cafes are less busy in the off season I hear you say….. but… in summer you can use all the seating on the footpath on the street. We had trouble finding any cafe or restaurant at lunch with spare seating inside. Last year in summer I had no issues at all. In summer most cafes have triple the amount of tables available

We eventually found one, I had a Sate chicken pizza which was delicious. Sharon had a Shwarma plate. Emma has the Dutch equivalent of a chicken Schnitzel. 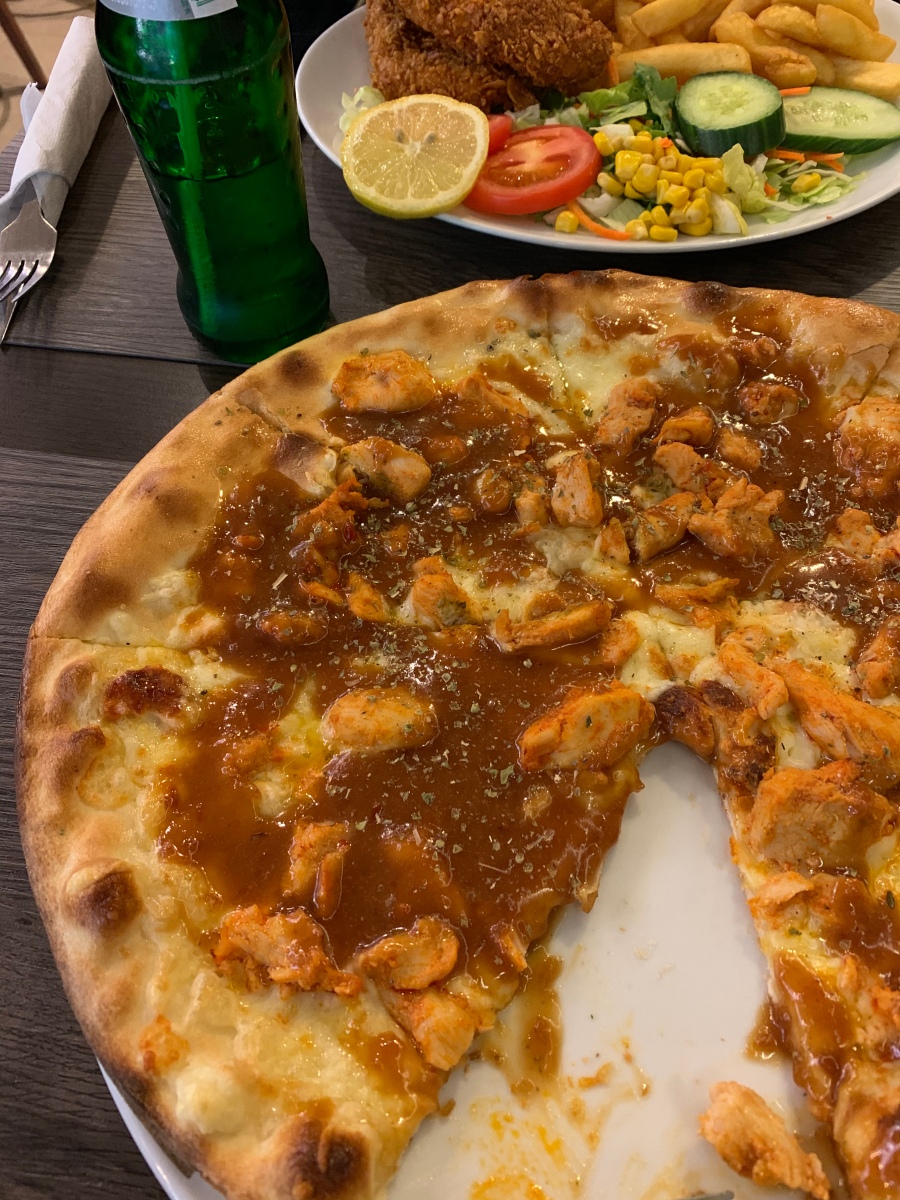 After warming up and drying out, we checked out the Diamond Museum next door to the Rijksmuseum. Great little museum going over the history of diamonds and the role the Netherlands has played in the trading, cutting and polishing of them.

After the big lunch we were not really hungry, but no visit to Amsterdam is complete without a visit to FEBO a unique Dutch fast food chain where you look at food in a window, deposit some coins and take your food. I’ve heard that fast food isn’t the only unique Dutch thing that gets displayed in shop windows in certain parts of the city…

Yes, it’s a red light, it’s a window in Amsterdam but it’s not what you think 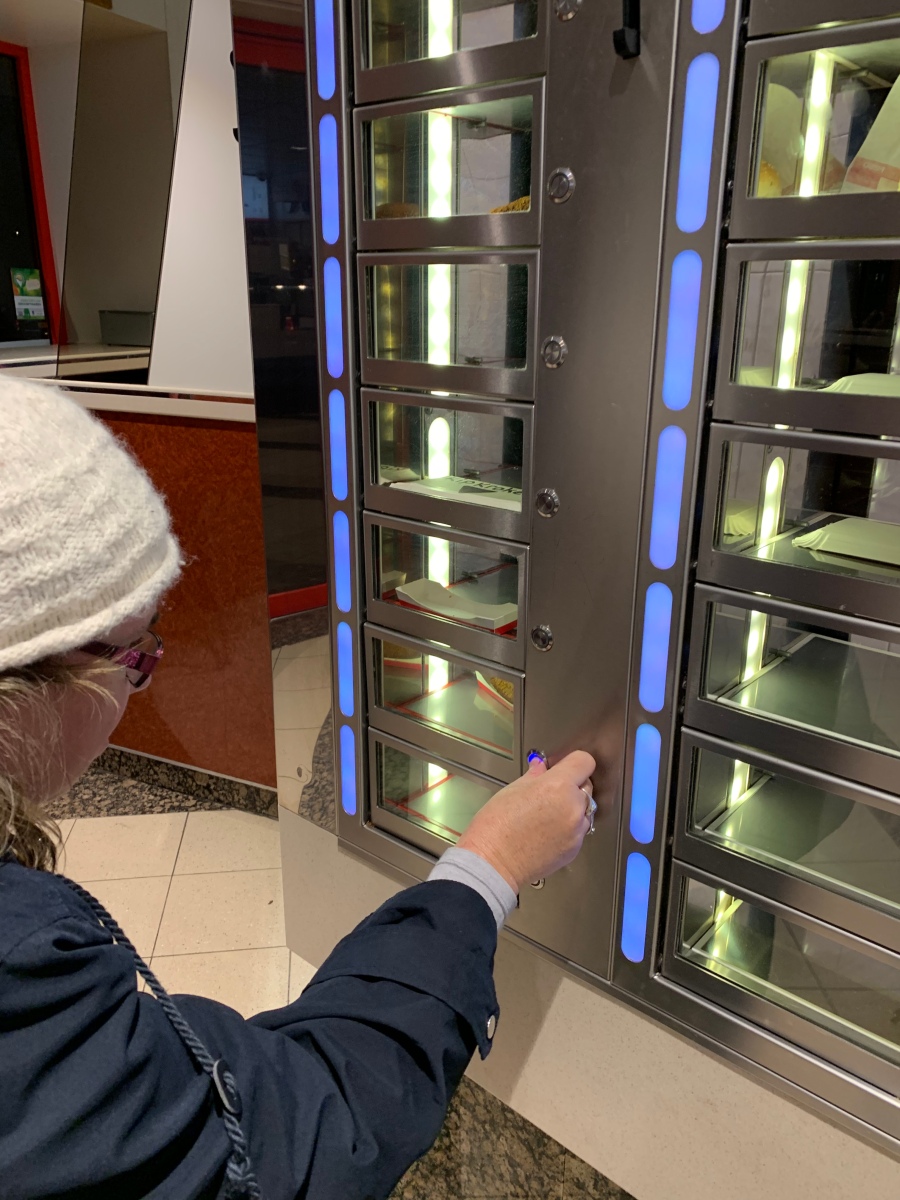 And you get your little bit of fried Dutch goodness. A happy ending for sure