As much as the thought of going outside in the wet to find dinner was unappealing, the options in the hotel were not great. A bit of googling found a Gyoza restaurant a few hundred metres down the road, so off we went.

We couldn’t find it at first, but then we saw an older guy beckoning us up the hill to where his shop was. This wasn’t Kabukicho in Shinjuku so thought we should be pretty safe. We found out it was takeaway only, but when it was obvious that was going to be a deal breaker, they said we could sit in the room upstairs to eat.

The room looked like some community multipurpose hall / church / school. There were a few other people eating here too. The food was brought up to us in takeaway containers. The whole experience was really odd, but the Gyoza was fantastic. 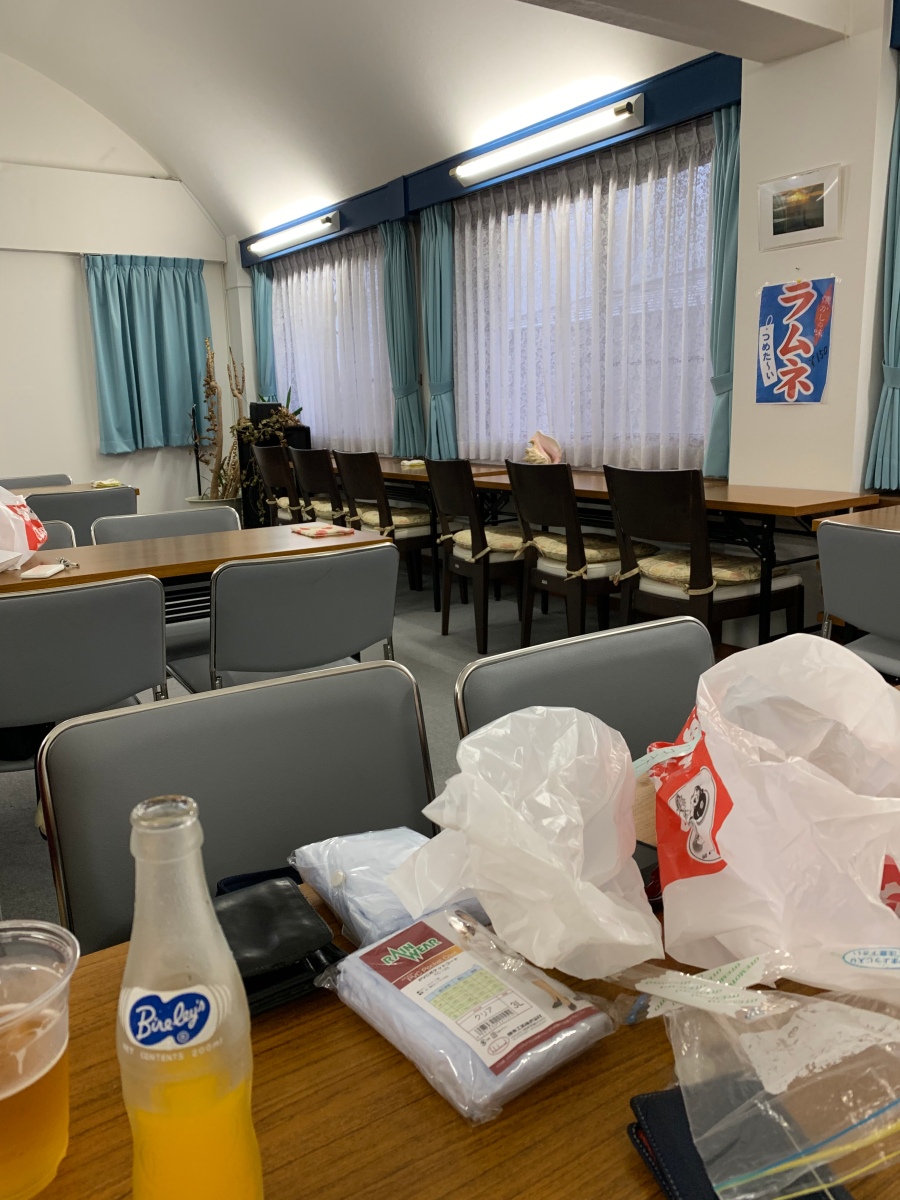 Stairs to the hall

Walking back to the hotel 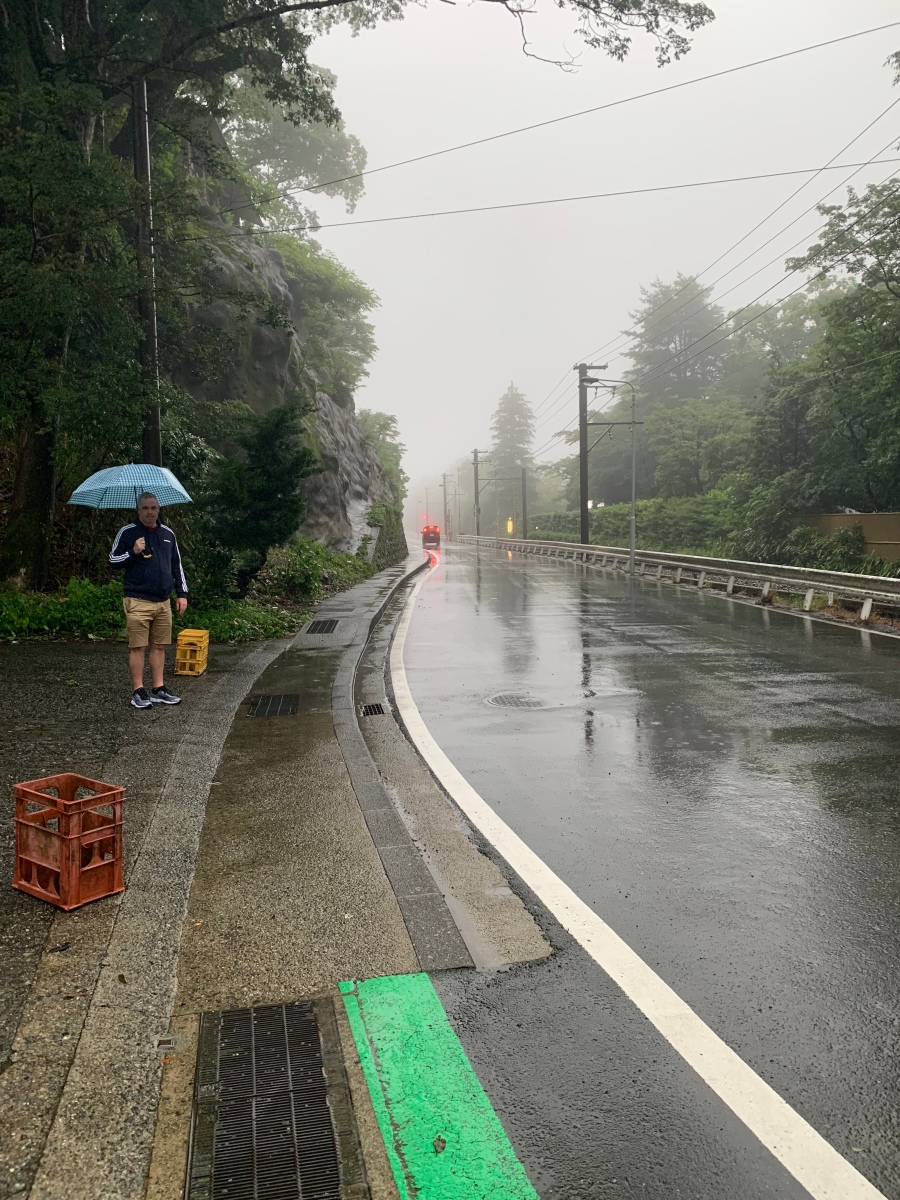 Hakone is a well renowned Onsen area in Japan. The hotel we are staying at has its own Onsen and we were paying the additional tax the government levies for Onsen usage, so after overcoming some significant cultural and mental hurdles for most westerners about getting naked in public and bathing with your fellow man, I gave it a go.

Super happy I did as the water was amazing and it really does feel great once you get out. Another Japanese cultural experience I can tick off the list.

When we first arrived there was no one in the Onsen so I was able to snap a few pics of the room. Obviously not the best Onsen in Japan as this is a budget hotel but a good starting point.

Not great weather today. Foggy and rain here most of the day and much much cooler than Tokyo. Unfortunately due to volcanic activity that’s released a lot of gas, the ropeway (Gondola) over Ōwakudani to the lake is closed. This was a little disappointing as I was looking forward to viewing the crater. A replacement bus was running which took us down to the lake where we could get on one of the ferries done up to look like a pirate ship. On the other side of the lake we visited the Hakone gate, which is a replica town set up to be like it was in feudal times to control and tax traffic between Kyoto and Edo (Tokyo).

There was a 20 minute queue to get a picture at the Tori gate, even in the rain!

Transport over the lake

The queue for the Tori gate !

Lunch in a little restaurant near the lake. Delicious beef curry, corn soup and salad 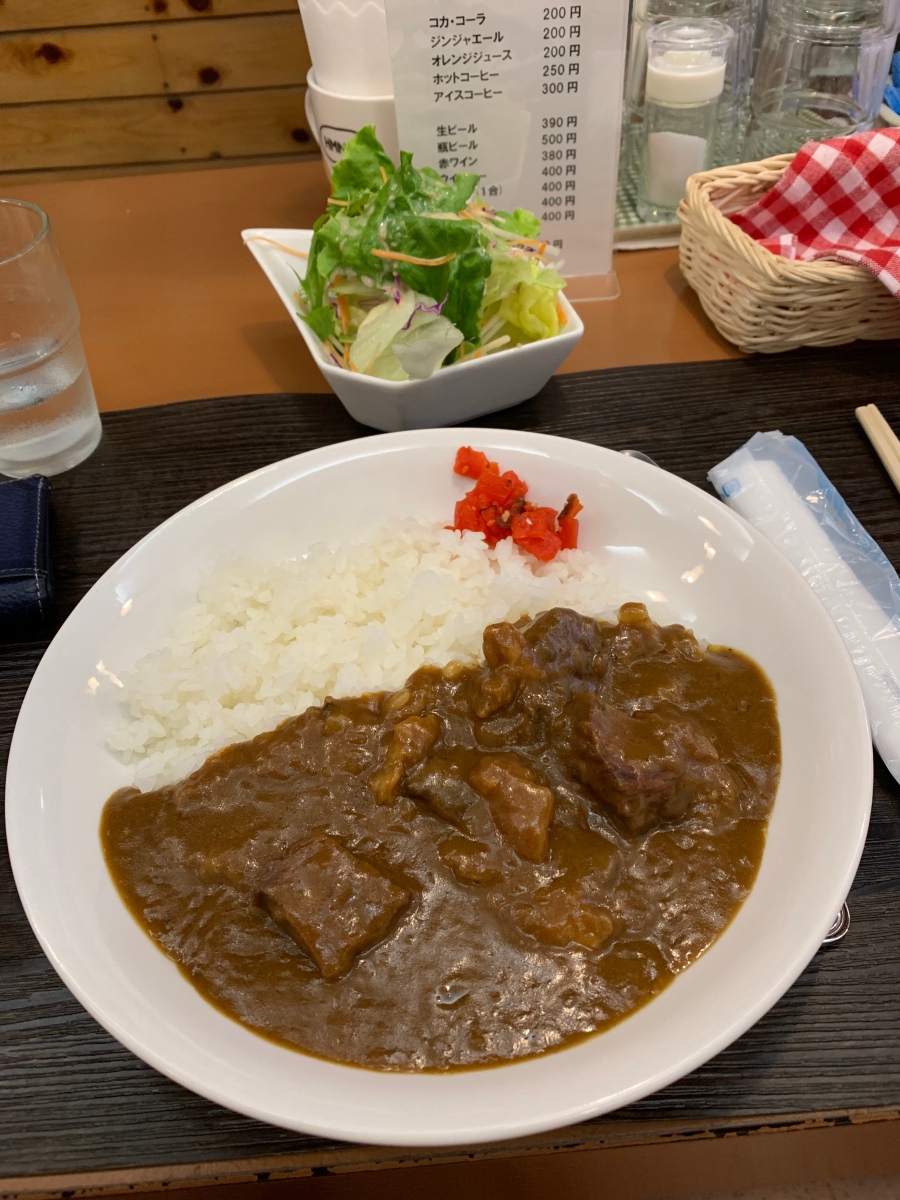 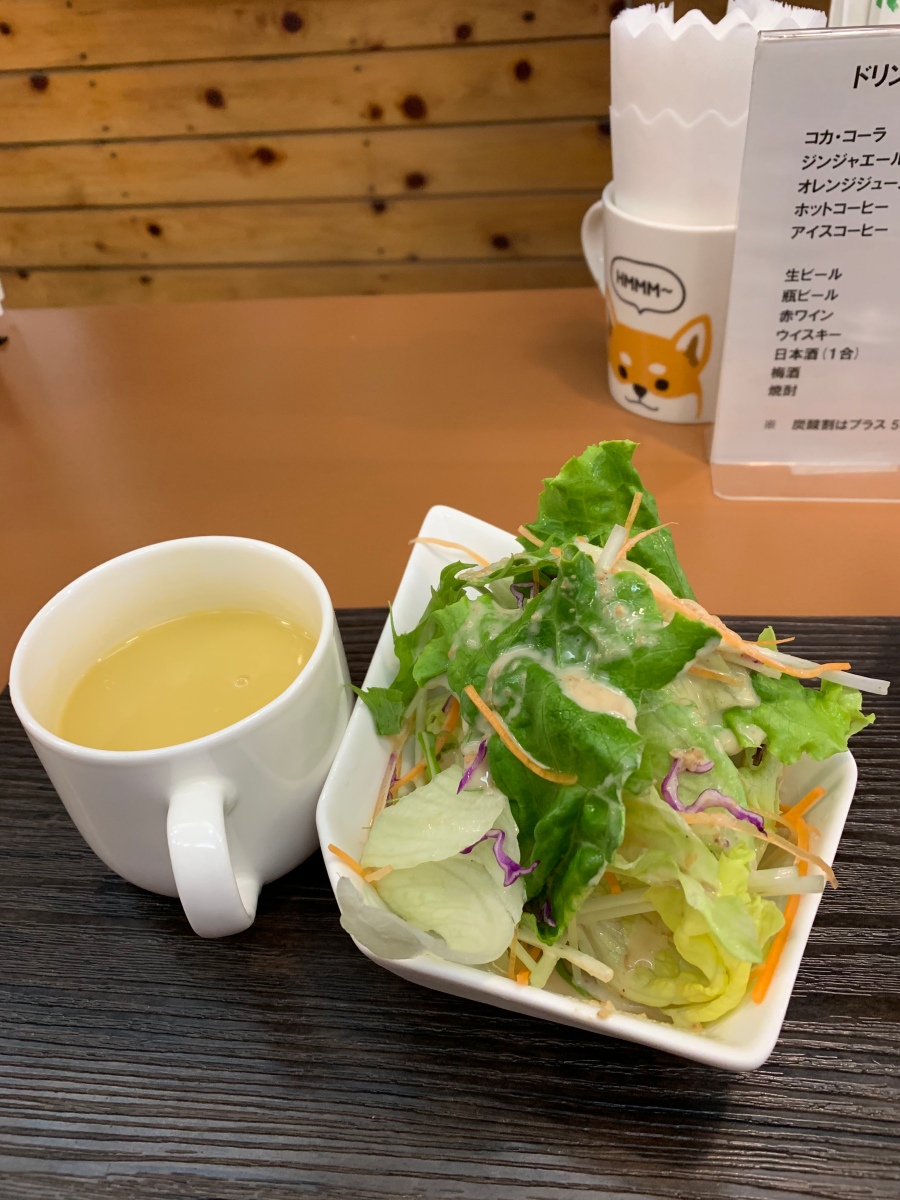 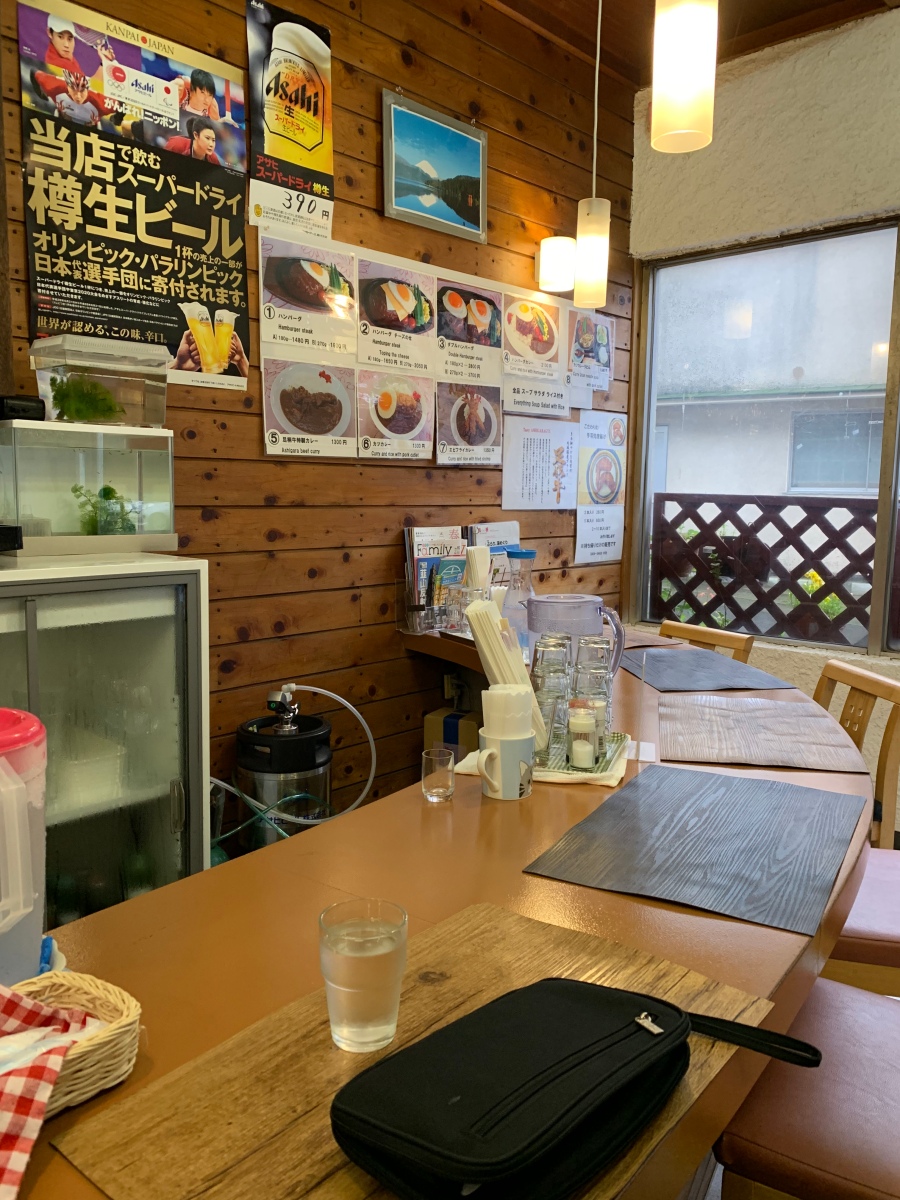 Anyone for a bunch of grapes ? $A65 at current exchange ! I want mine in juice form in a bottle for that price.

Coffee in a can for $2 is a much better option! 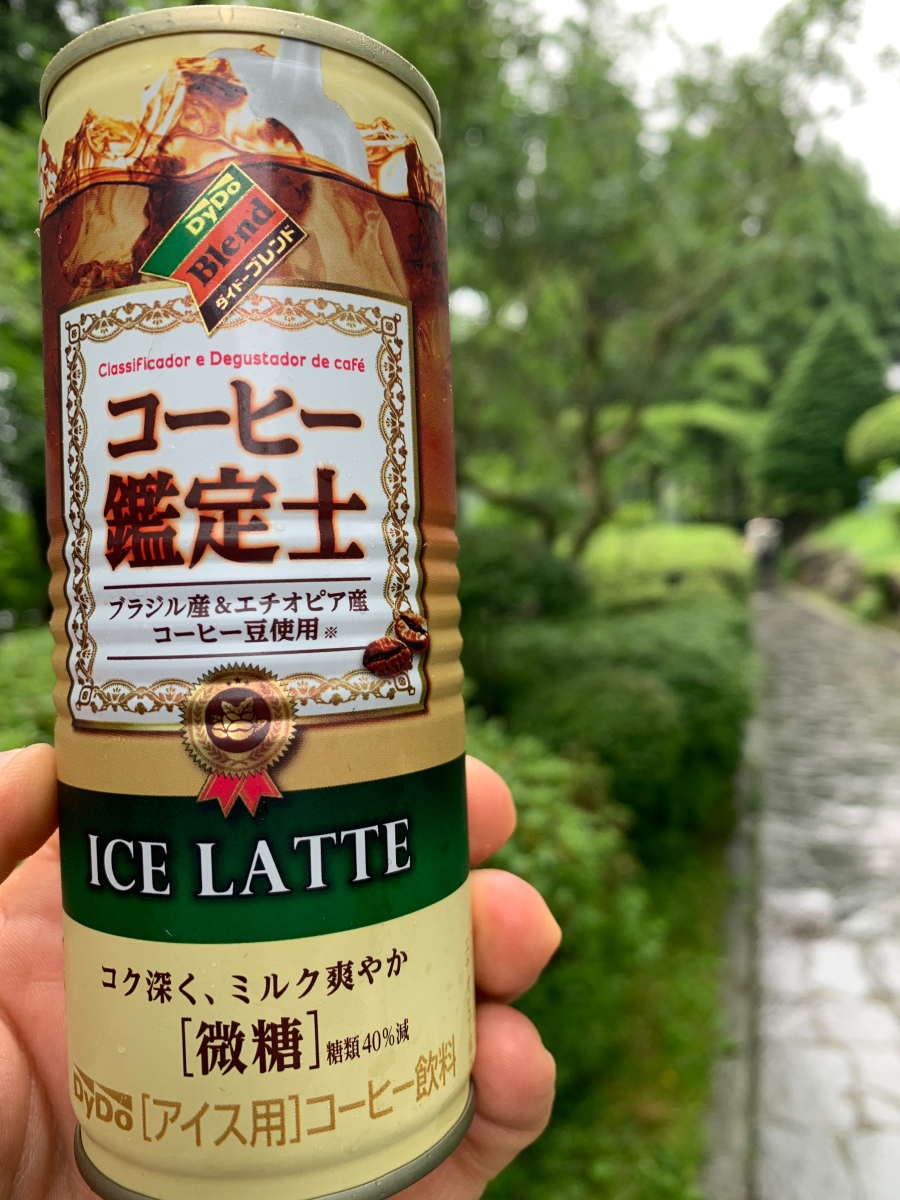 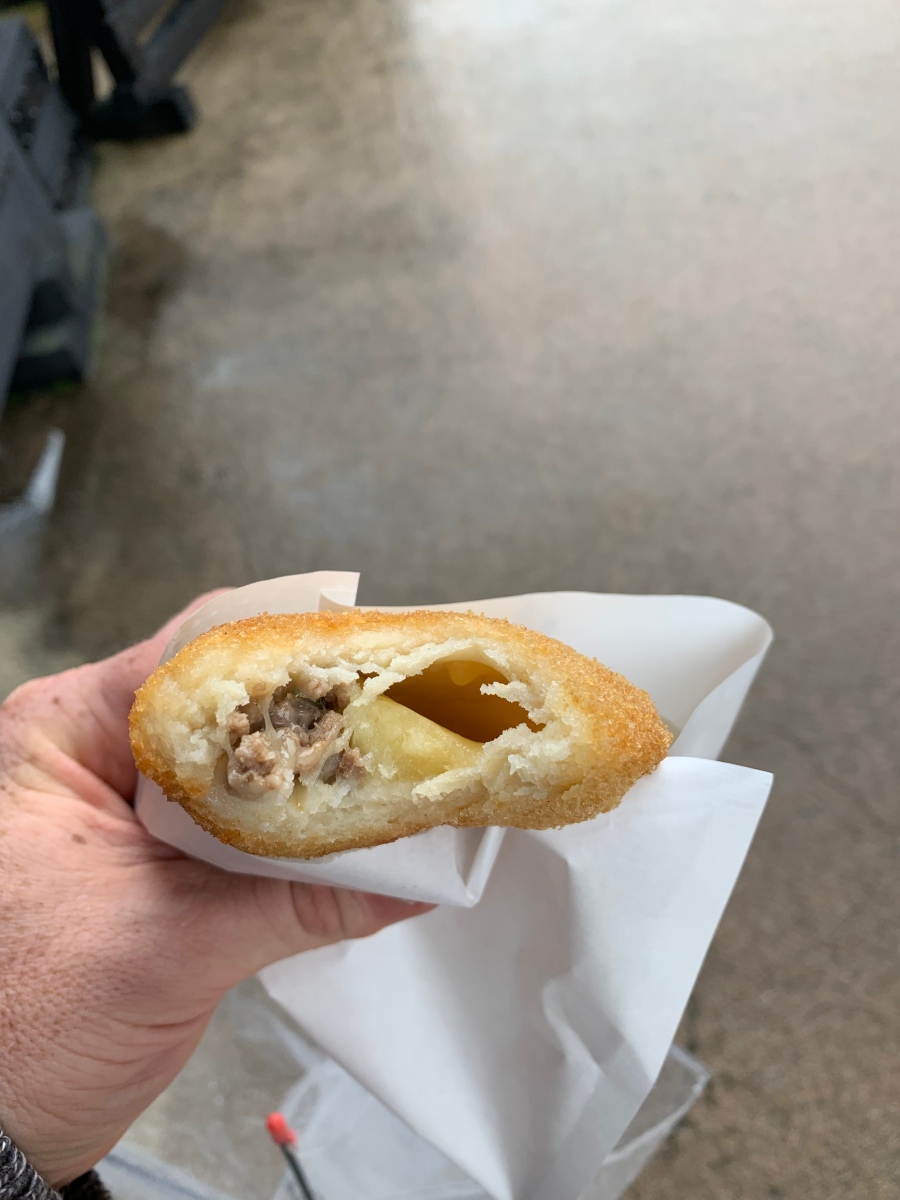 Pretty early start to the day, we wanted to get out early so we could have a full day looking around Hakone before we do the bike tour on Sunday. We left Tokyo on the 7.04 Shinkansen. Knowing nothing in Japan opens much before 7am, our chances of getting coffee were slim, however we did find one place in the station. Coffee was pretty bad, too hot and burnt, but drank it anyway.

It took three trains to get to Gora, bullet train to Odawara which only takes 30 min then two local trains. At Odawara you purchase a “Hakone Free Pass” (¥5000) which lets you use almost all transport within Hakone and covers the trains up from Odawara.

There was a little bakery here, so grabbed an interesting looking thing. Turns out it was like lemon custard filled donut. Nicer than it sounds and looks.

The second train is really interesting, in parts it goes up an 8% incline, which for a train is super steep. It’s one of the steepest railways in the world. It has three “switch backs” along the route to deal with the mountains it climbs.

We were at the hotel by 9:30 so left our bags to go and explore around Hakone. The hotel is great, right next to the station for easy access to everything, really modern and has its own Onsen. 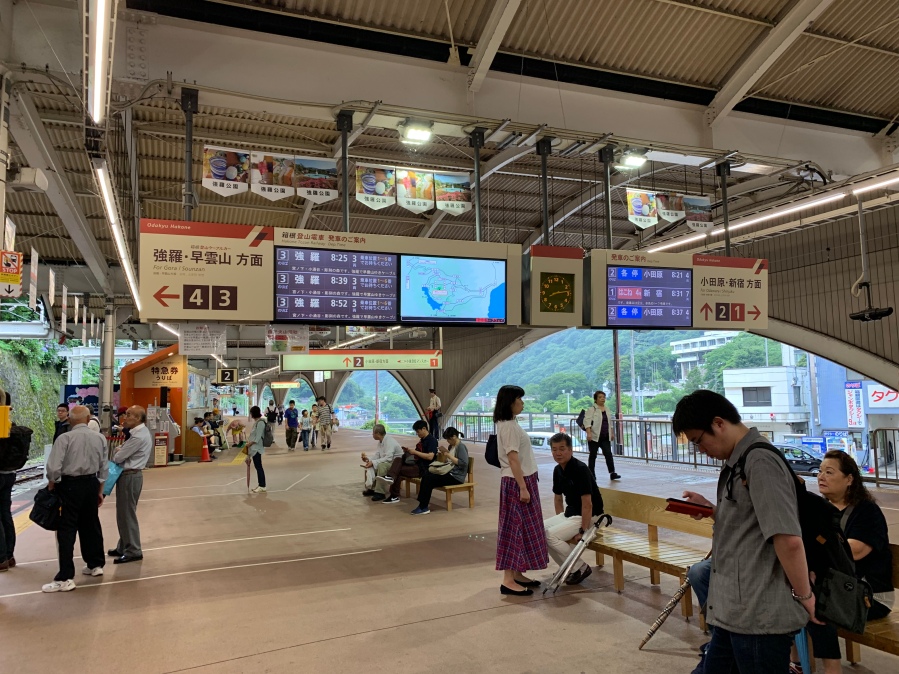 Later in the evening when we returned the the hotel, they had a café open, so decided to try the coffee. Machine made and they charge ¥500 for it. Better than the breakfast coffee! 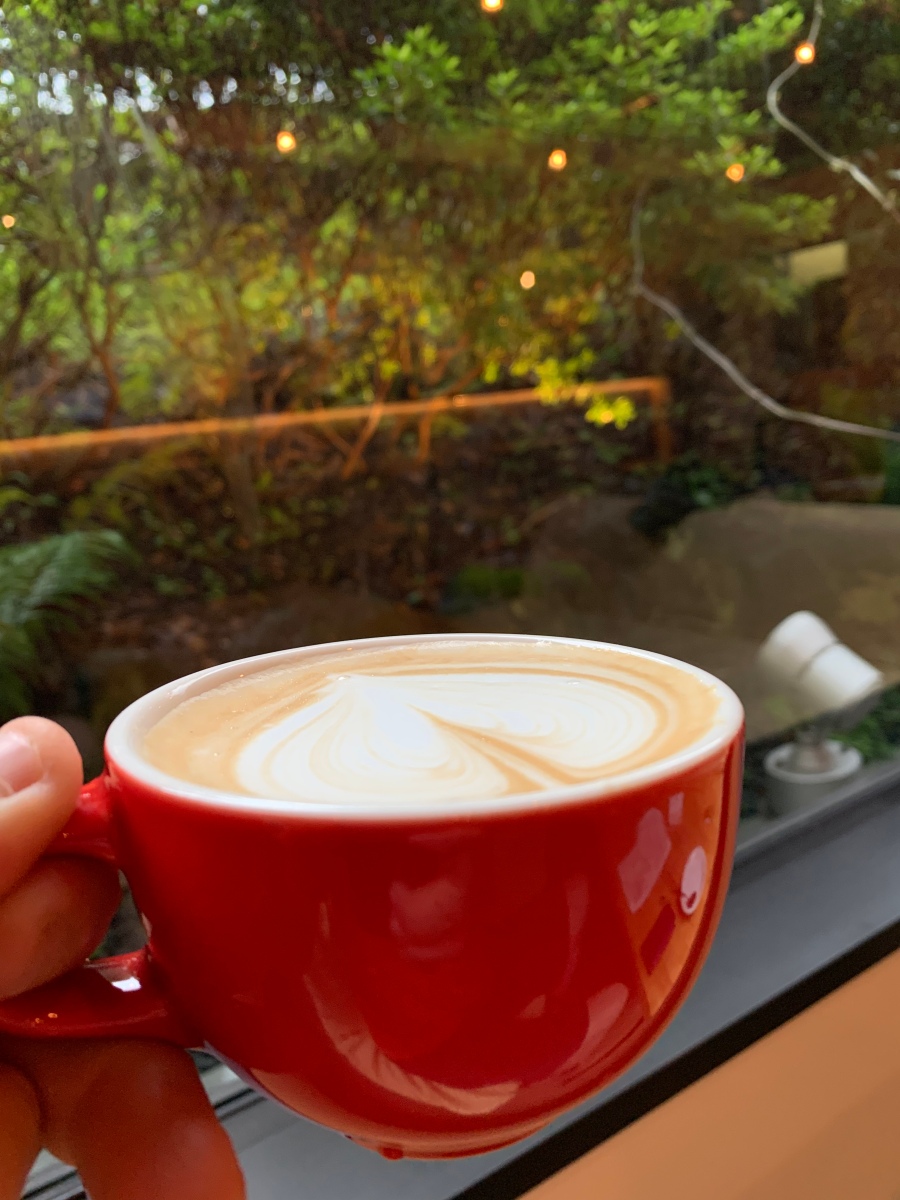 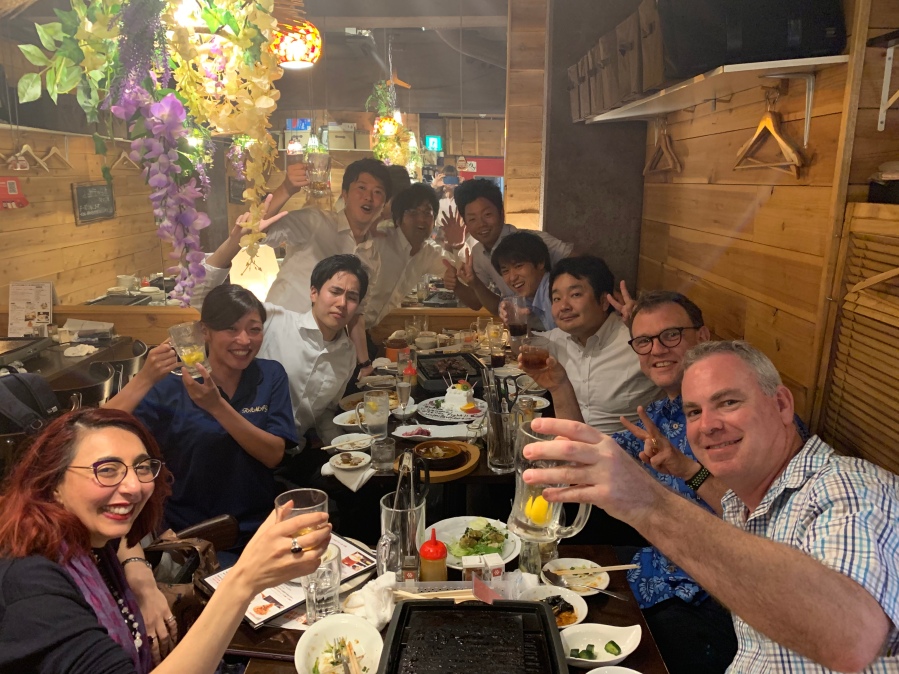 I contacted a friend who lives in Tokyo who I haven’t seen since my last trip here in 2009 and organised a dinner out for our last night in Tokyo before heading south. Big thanks to John for passing on Maria’s contact details!

Maria checked with me what food we did or didn’t like. I mentioned I don’t like seafood (a real dilemma when in Japan) so Maria booked us Into a “meat” restaurant called 300B. It was in a smaller street and in the basement. Don’t think they had English menus but wasn’t an issue with Maria being able to translate.

We purchased the all you can eat and all you can drink package for ¥5000 that’s valid for a 2 hour seating. I can say we got absolute value for money, we had so much food and plenty of drinks. It included beer, wines and spirits. I tried some plum wine, more like a plum spirit and it was delicious. Very very easy to drink way too much of that. The food was sensational.

The waiters bring you slabs of meat and you cook and cut it yourself at the table over a small electric grill. As well as meat you can choose all variety of things, we also ordered some octopus and salads.

There was a group of Japanese work friends celebrating a birthday next to us and when we offered to take a group photo for them we were instant best friends and drinking buddies for the next hour. Thankfully Maria speaks fluent Japanese and could translate for us. 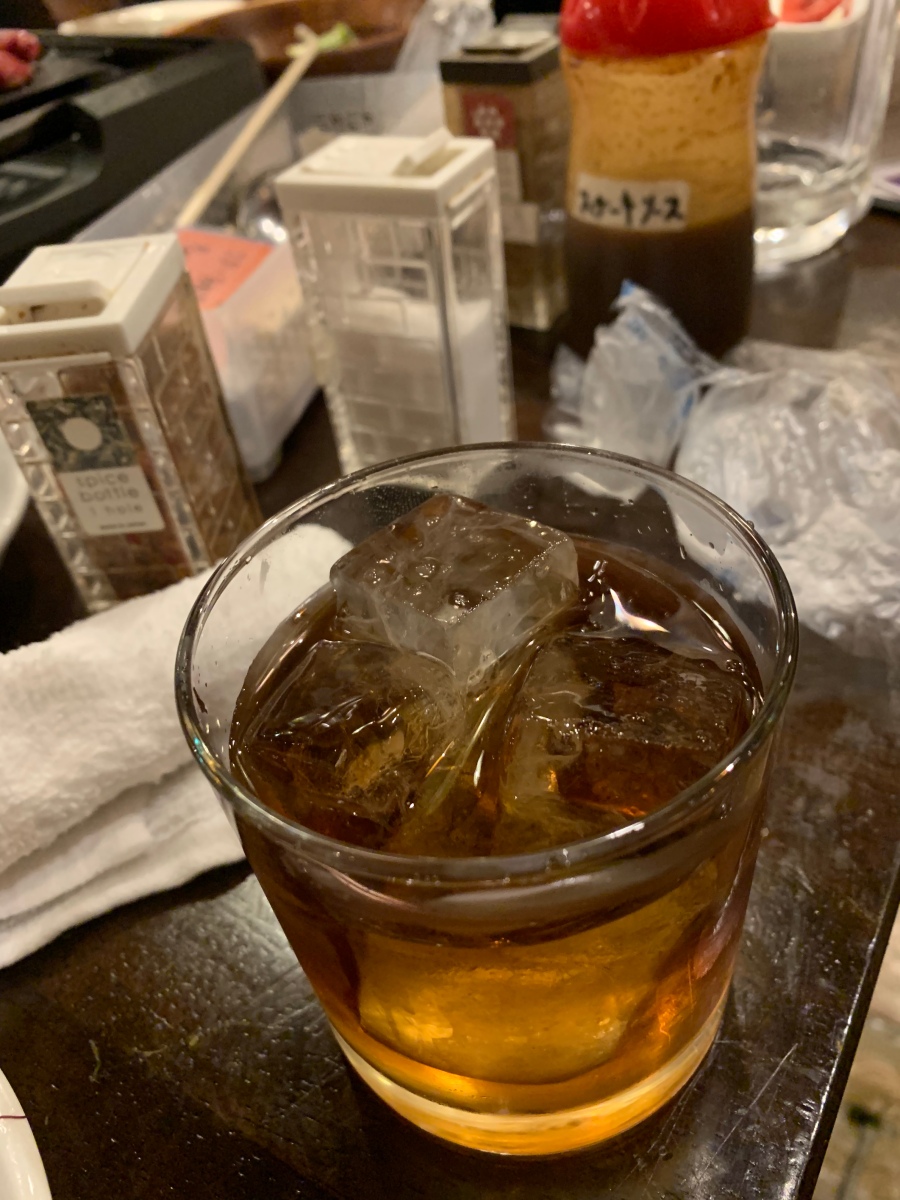 After dinner Maria took us on a walking tour of Shinjuku, Kabukichō and Golden-Gai. Kabukichō is the red light district, although it seemed relatively tame compared to other cities in Asia and Europe, if you are male you will get hounded by touts offering you all manner of questionable services and experiences in the various establishments dotted throughout the area, even if in female company. Maria sent them packing with a few short and sharp sentences in Japanese!

The Golden Gai area is mostly ancient narrow streets with hundreds of tiny bars that fit no more than half a dozen patrons. Most have a cover charge of ¥500-¥1000 yen and drinks are normally around the ¥1000 yen mark. Quite a few are not welcoming of tourists and have a “members only” sign in English at the door.

The area looked amazing at night with all the lanterns and dim lights. We ducked into the hotel that has the Godzilla on its roof. Unfortunately the roof was closed and we couldn’t go outside but I managed to get a shot from the window. 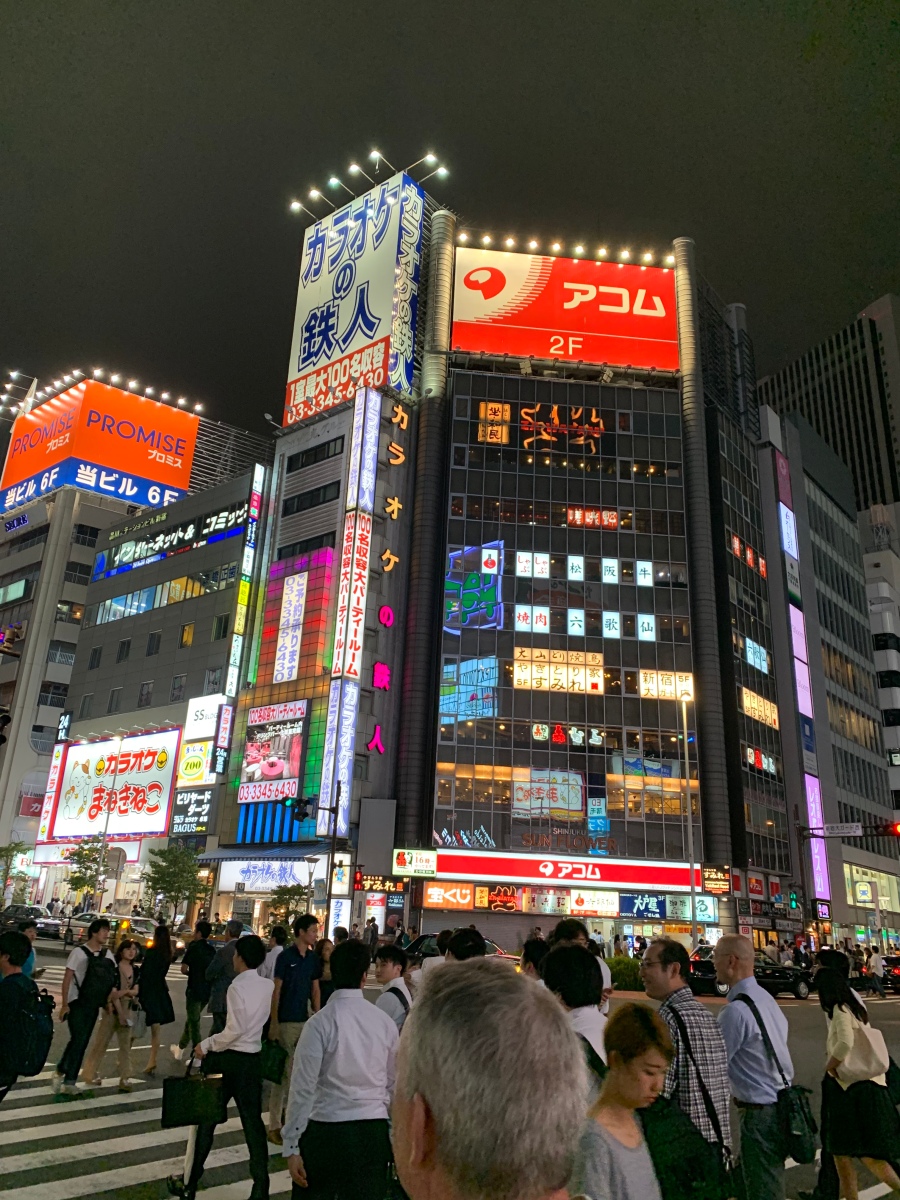 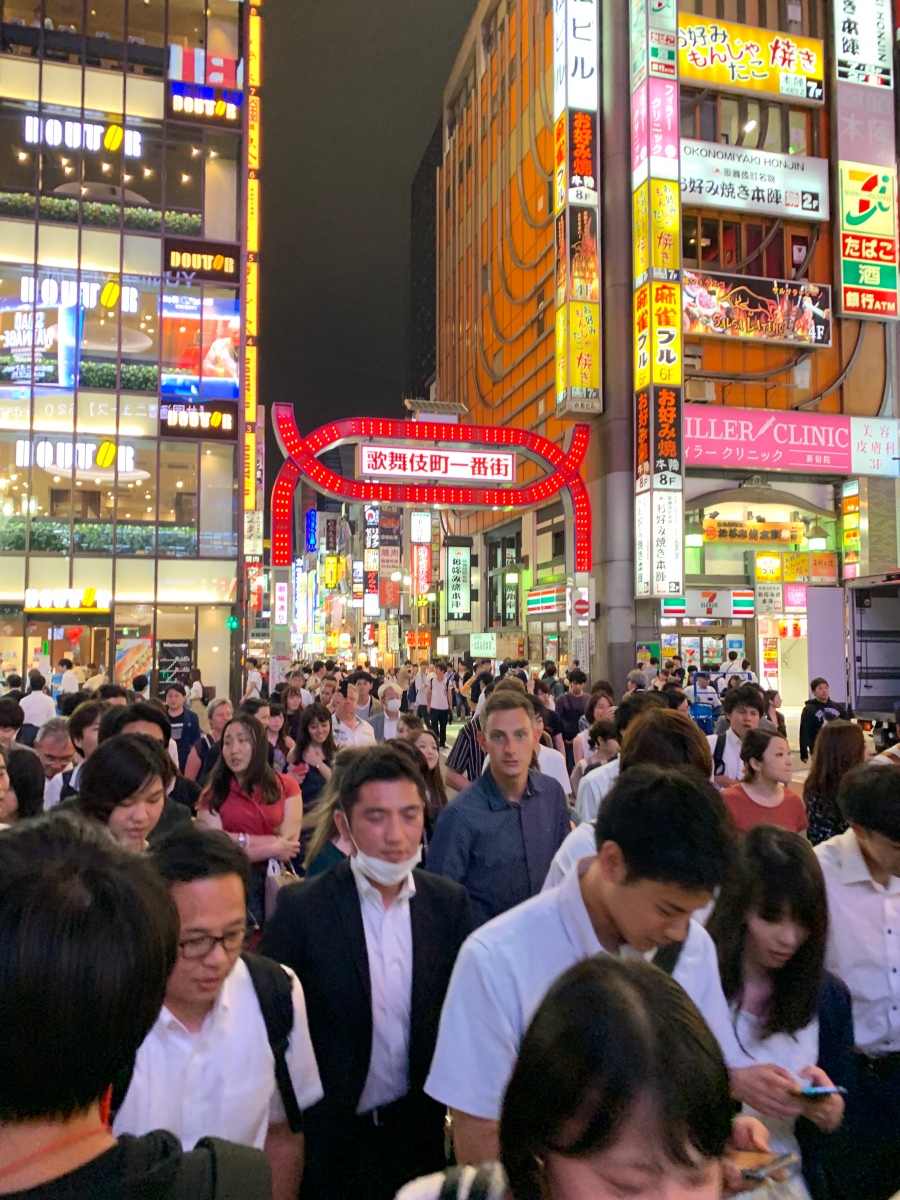 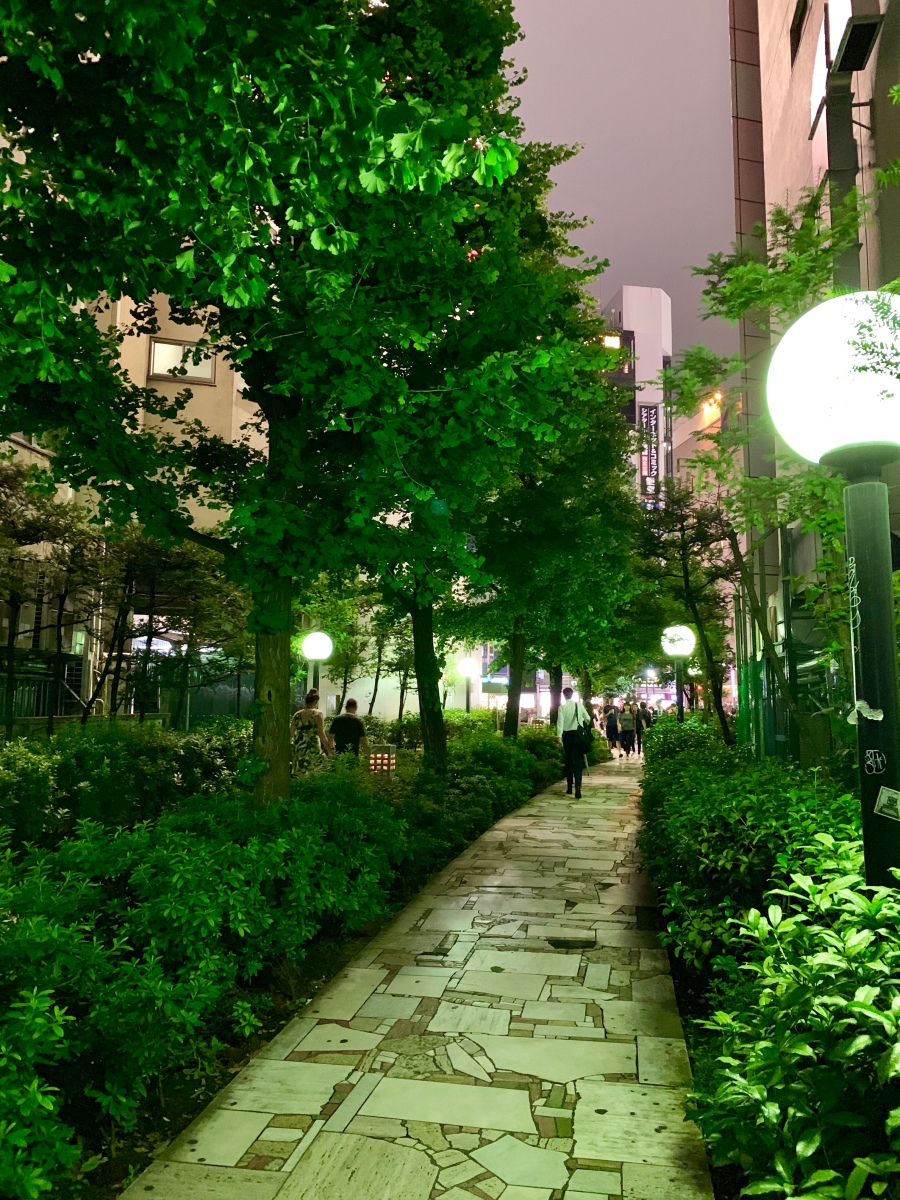