I didn’t have time for a morning coffee, I had a bike tour at 10am. More on that later, but nothing was open that I could see before the tour started, and since I’d been up to 2am just getting here so I couldn’t do my normal early explore.

However the bike tour did give me the opportunity to view all the cafes in Copenhagen, and I’m excited to say the coffee culture here looks very promising. I haven’t seen one single automated machine. It’s hand made.

Mike from Mike Bike recommended we go to Israels Plads for lunch, one of the top open air markets in the city. 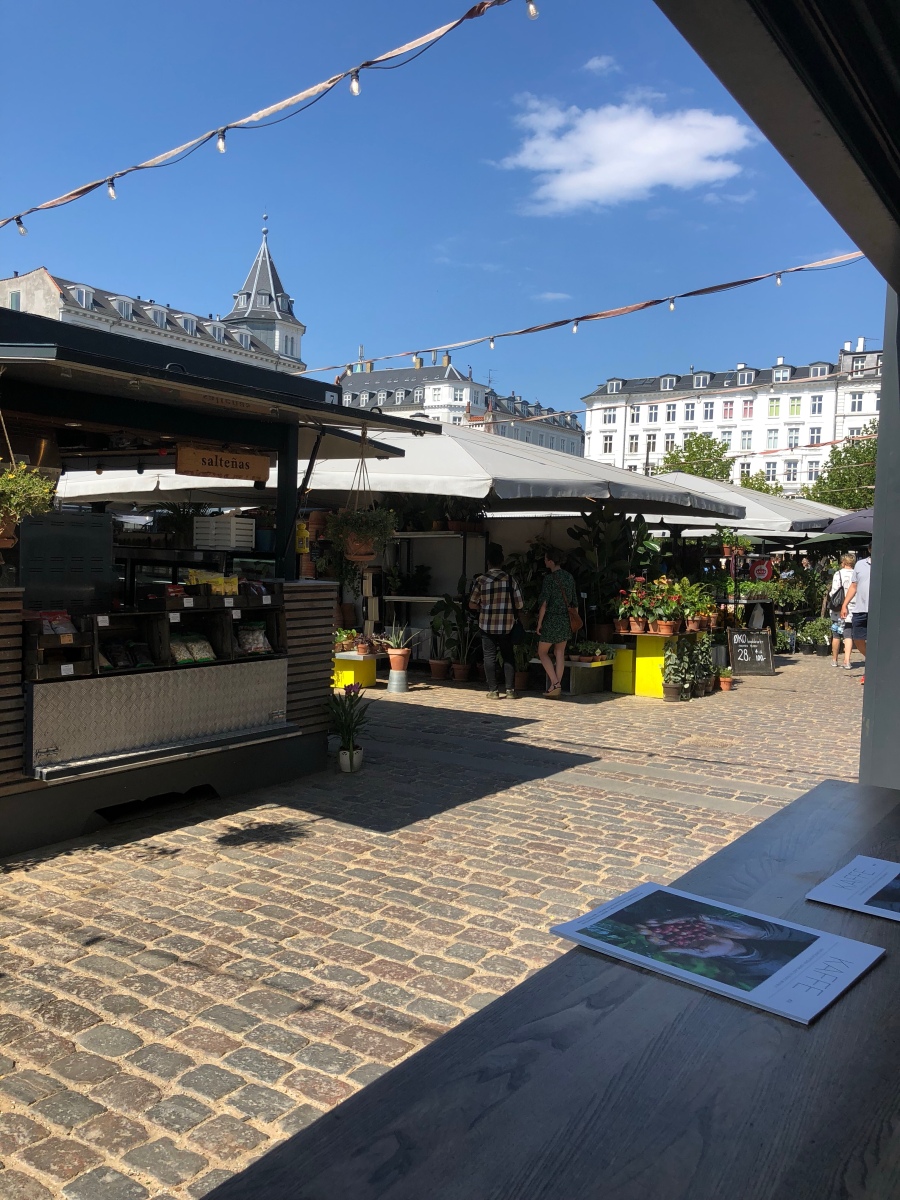 I of course had to try a famous open sandwich (a Smørrebrød). Mike thinks the place here does some of the best. I had a chicken one, it didn’t disappoint. 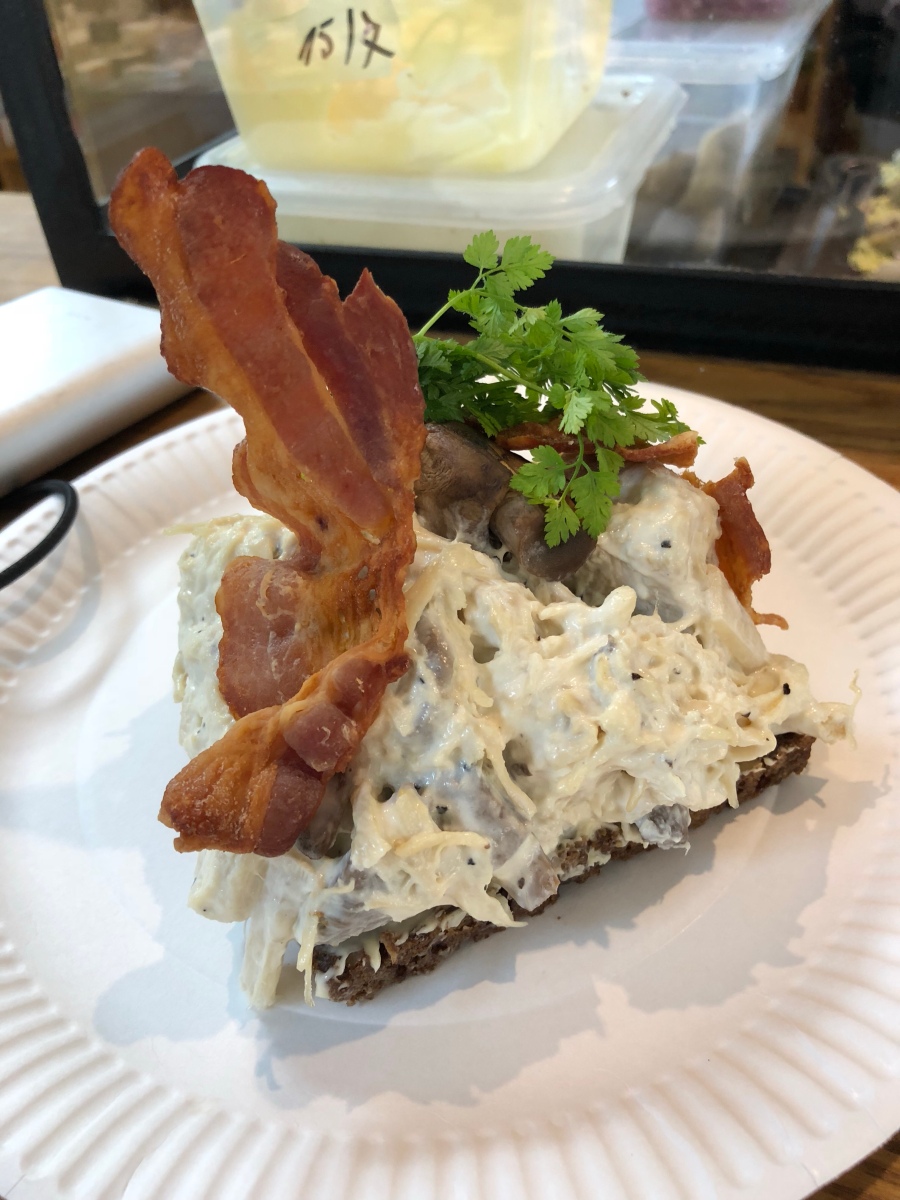 Some of the various selections

After wandering a bit I checked out the coffee options and there were at least 3 decent looking ones in the market. (France I hope you are reading this…)

I settled on the “Coffe3 Collective” apparently they have 5 stores in Copenhagen and roast their own beans daily, 15 min from the store. The coffee was excellent, a decent 7.5 or even 8 out of 10 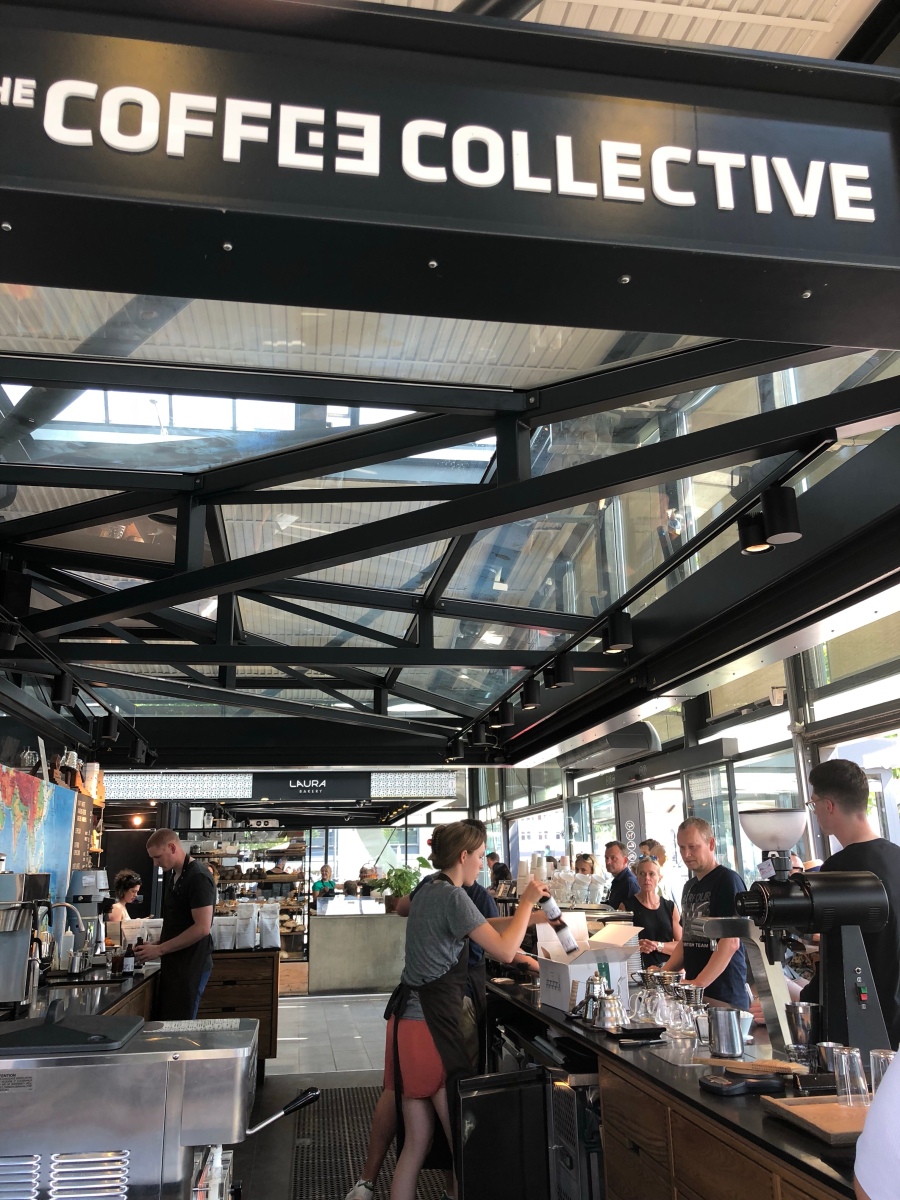 I did notice a few coffee vans around parks here in Denmark. This is a great sign of a good coffee culture

And before I forget, my coffee from today. I’m super happy my first coffee in Denmark was awesome.

The SAS flight was one of the most relaxed stress free plane boardings I’ve ever had. Probably due to the plane being only half full and one of the last flights out of Heathrow for the night. They called business class then SAS go, and a few of us are waiting around for economy to be called, it wasn’t so we just wandered up anyway, turns out SAS go is economy. Was pretty impressed with SAS. Similar to the BA euro flyer (ie cheap, but not Ryanair type cheap). Seats were reclining, USB power, and inflight wifi. Stuff BA didn’t have. So far better than my flight to Poland.

Didn’t bother with Wifi as it was only an hour and gave me a chance to catchup on all things Copenhagen from the awesome little book Sharon and Emma gave me for my birthday. It’s put me in the direction for a coffee or two over the next few days. I’ve also worked out how to signup for Copenhagen’s bike share. Will be interesting to compare it to Paris.

Was a very clear night flight awesome watching the sunset out the other window. I prefer isle seats, so I wasn’t at the window to take a photo however the kind fellow opposite me took one for me. The flight was only 1.5 hrs and even though it was delayed it seemed to go super quick

After landing found the train and got a ticket

The phone network welcomed me to Denmark

Found my hotel. The central station wasn’t as clean and spartan as the one at the airport. The trip took about 25 minutes. Would seem central stations truly are the same the world over 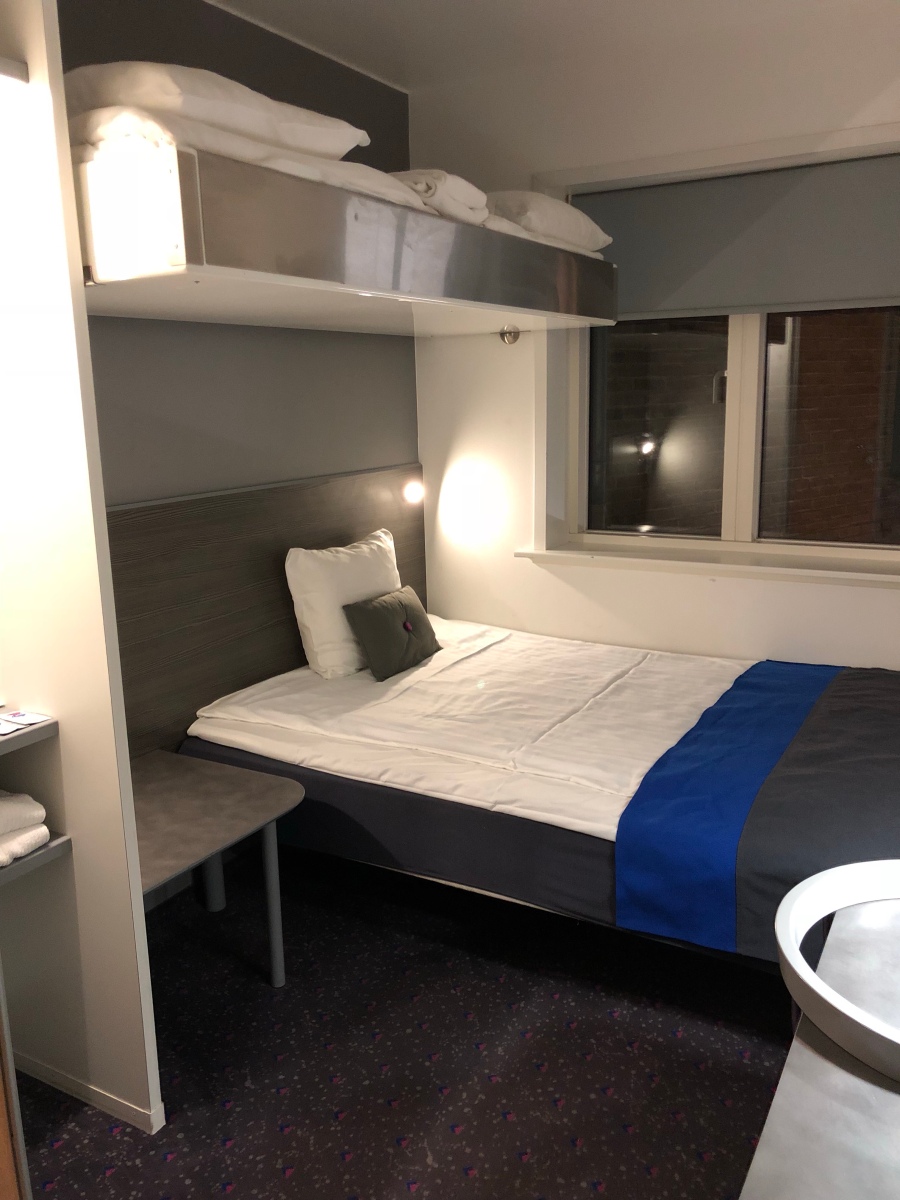 Denmark is supposed to be the happiest country on earth. Even the power outlets look happy !

They even have a model little mermaid at the airport 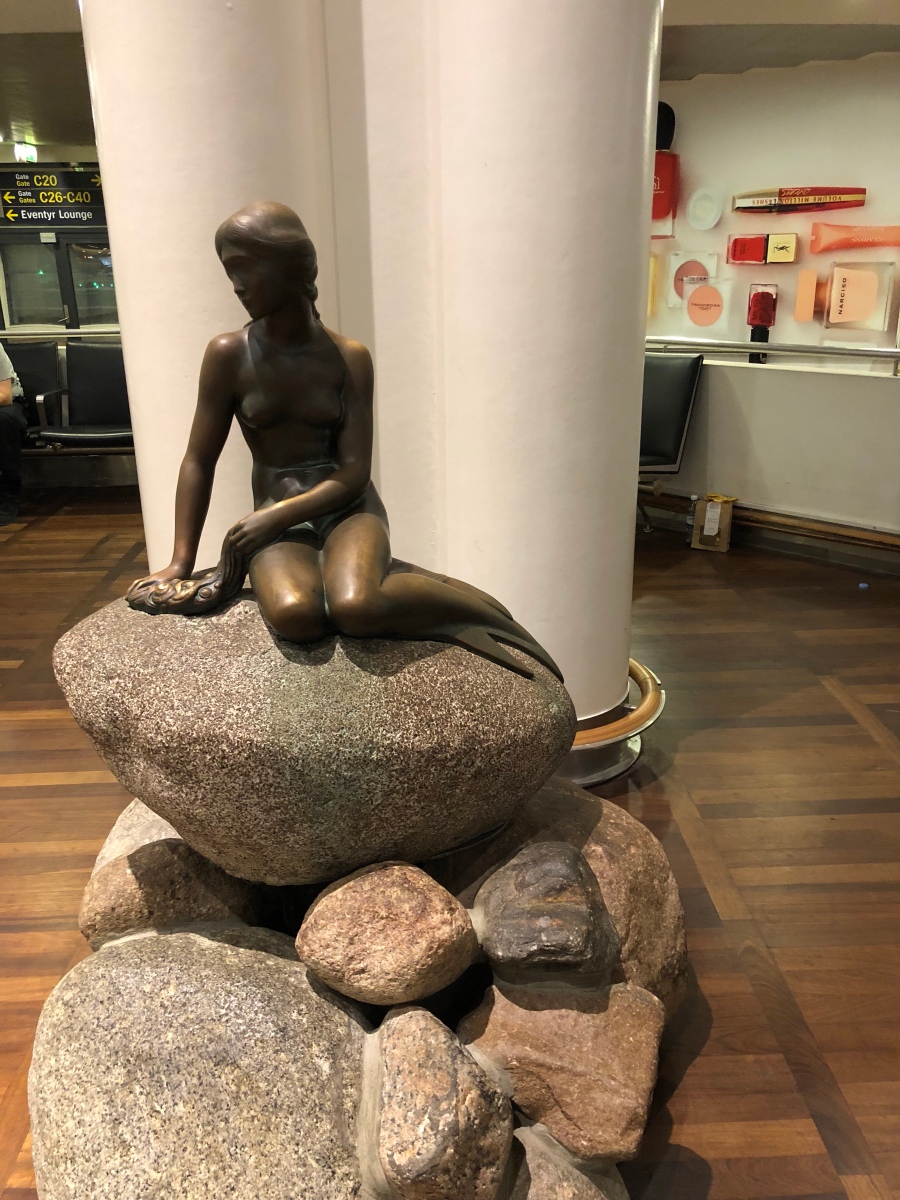 I’m leaving London yet again this holiday, third time in as many weeks I’ve departed this wonderful city once for Poland, once for France and now for Denmark. It’s a very weird feeling as Sharon and Emma are heading back to Sydney whilst I continue on. Emotionally it’s holidays ending, holidays starting and saying goodby to the family for two weeks all rolled into one.

We were in bed pretty early last night from the final day in Paris and transfer to London. Our day technically started again at about 20 past 12 in the AM when the fire alarm in our room went off for a few seconds. In my dazed half slumber I thought it was one of the multitude of electronic gadgets I have going off but then realised it was the alarm. It stopped then 5 minutes later came on again and didn’t stop. Looked in the corridor to see lots of people heading out, but couldn’t see or smell any smoke and looking out the window everything seemed fine. Before exiting into the cool night half naked I called reception who confirmed that another guest got busted smoking in their room. I could tell from his tone he was super pissed about it. For him it turned a quiet nightshift into a nightmare.

Once we were up and out (at a more reasonable 10am) we jumped on the tube to head to the Science Museum. Totally wow wow wow. For me this was complete nerd heaven. Not sure why I never visited it on my last trip, but on my next one I’m spending a full day in there.

Before entering we grabbed a quick bite at a mini Pret store, and the coffee was a surprisingly good one, better than I expected. Maybe it was just I’d gotten used to all the crap coffee in Paris. 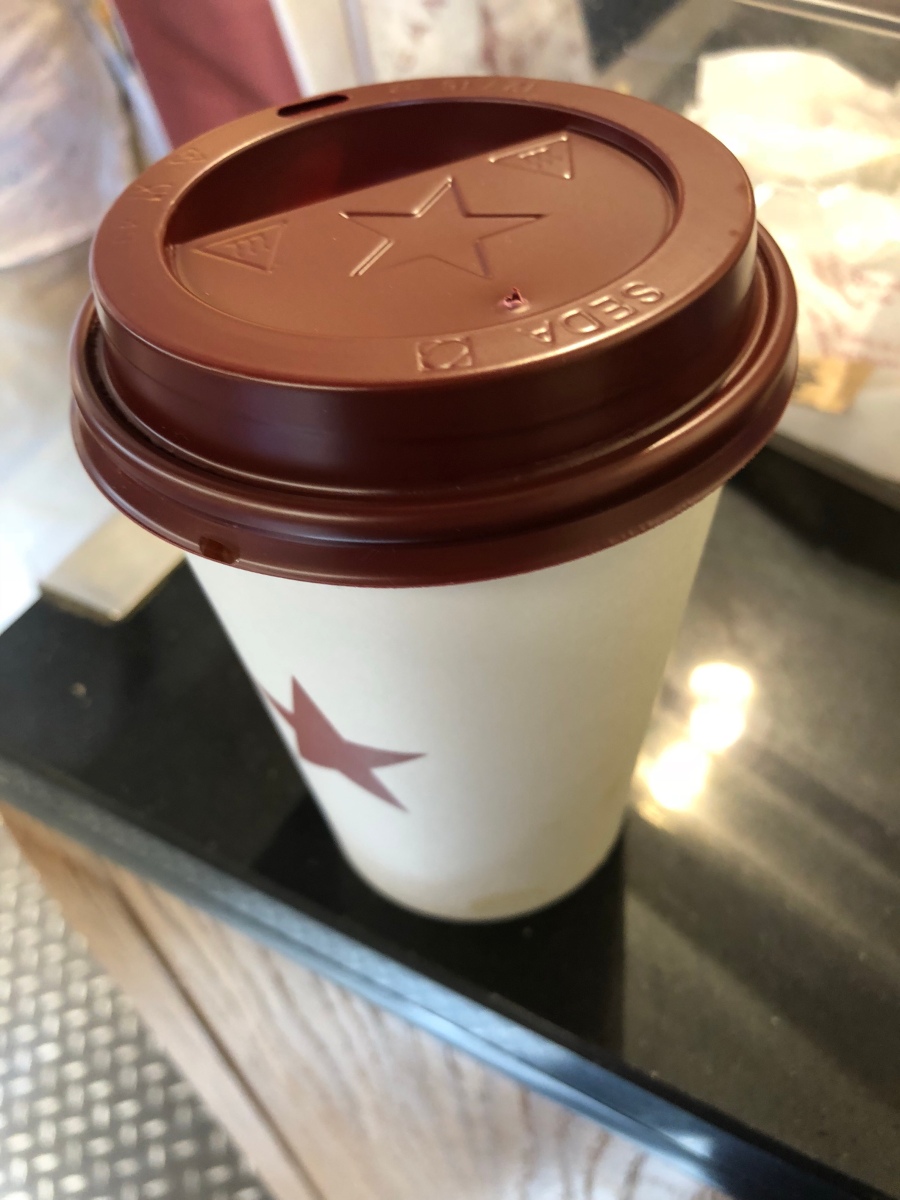 They have James Watt’s workshop here in the museum. 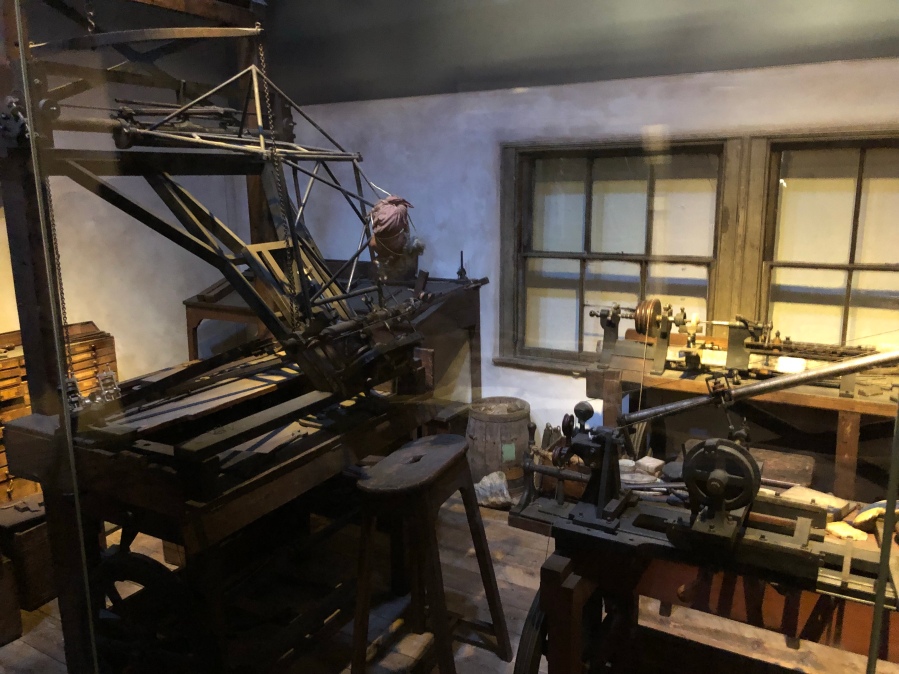 They have stacks of cool stuff on display. Remember I saw someone riding a chopper bicycle in London about 2 weeks ago? 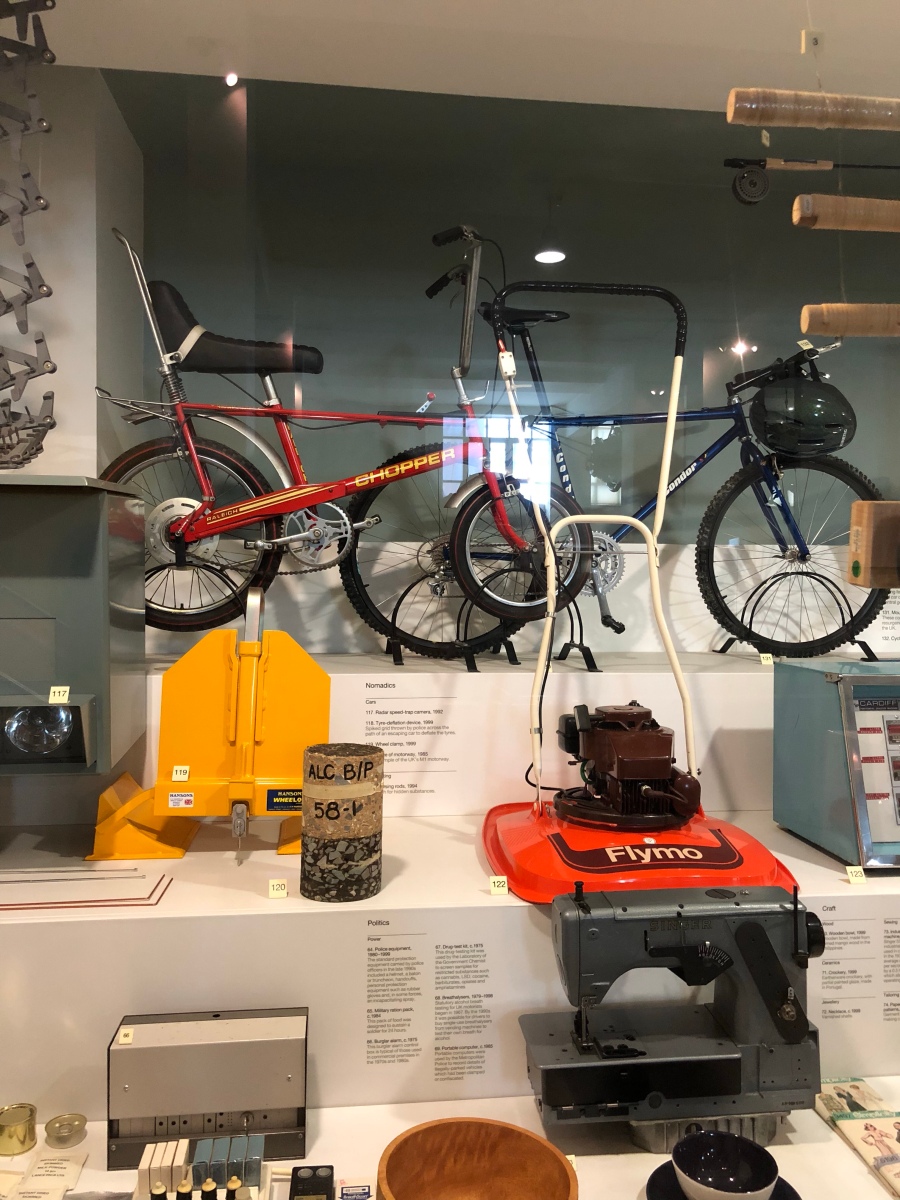 They even have the first computer I ever owned displayed (VIC20). Now I do feel old. They had all the greats from the 80s here 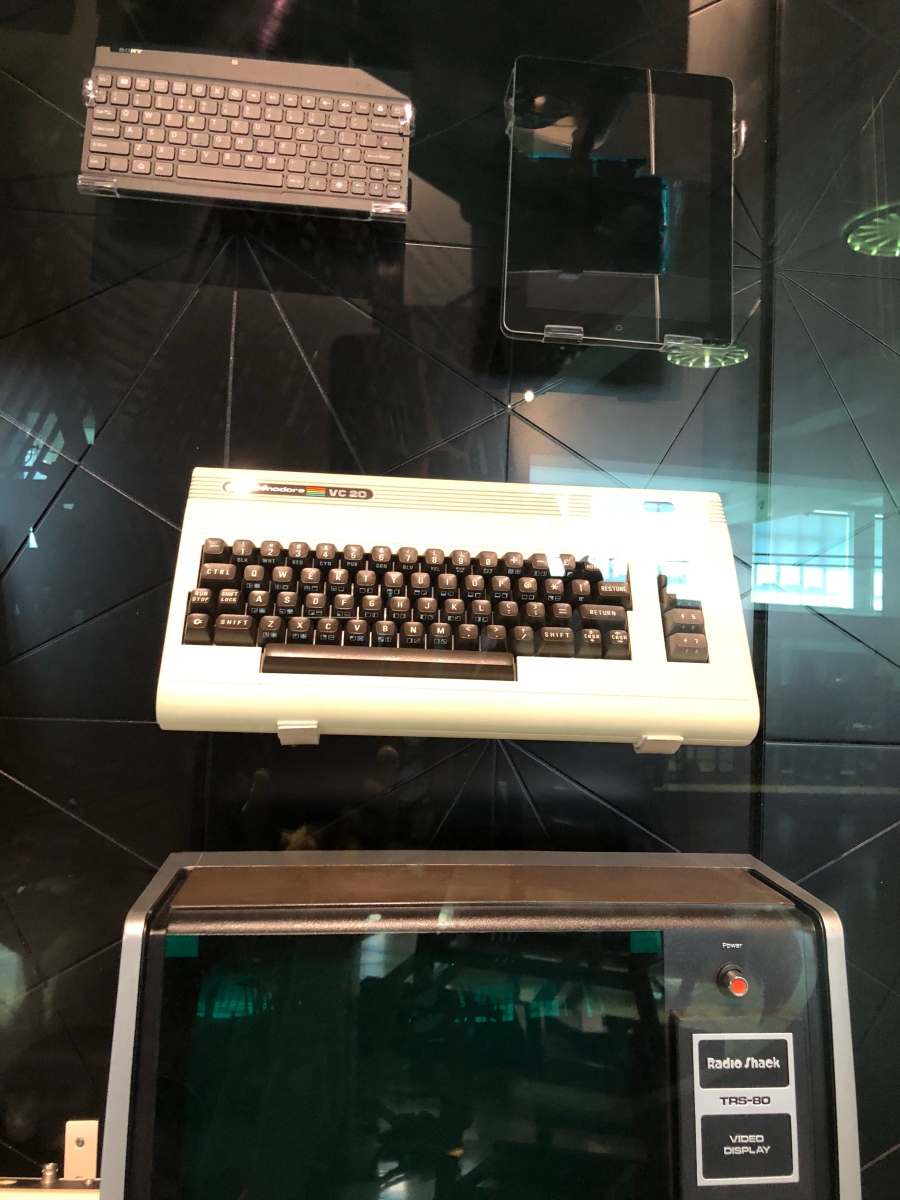 John will recognise this blast from the past :-

One fantastic thing about London is all the free museums. We spent a few hours here at the Science museum and it cost nothing (I donated the recommended £5, but it’s by no means compulsory). Could could spend a week visiting all the museums here and not spend a cent (or a penny) and London has some fabulous museums.

I couldn’t resist this t-shirt 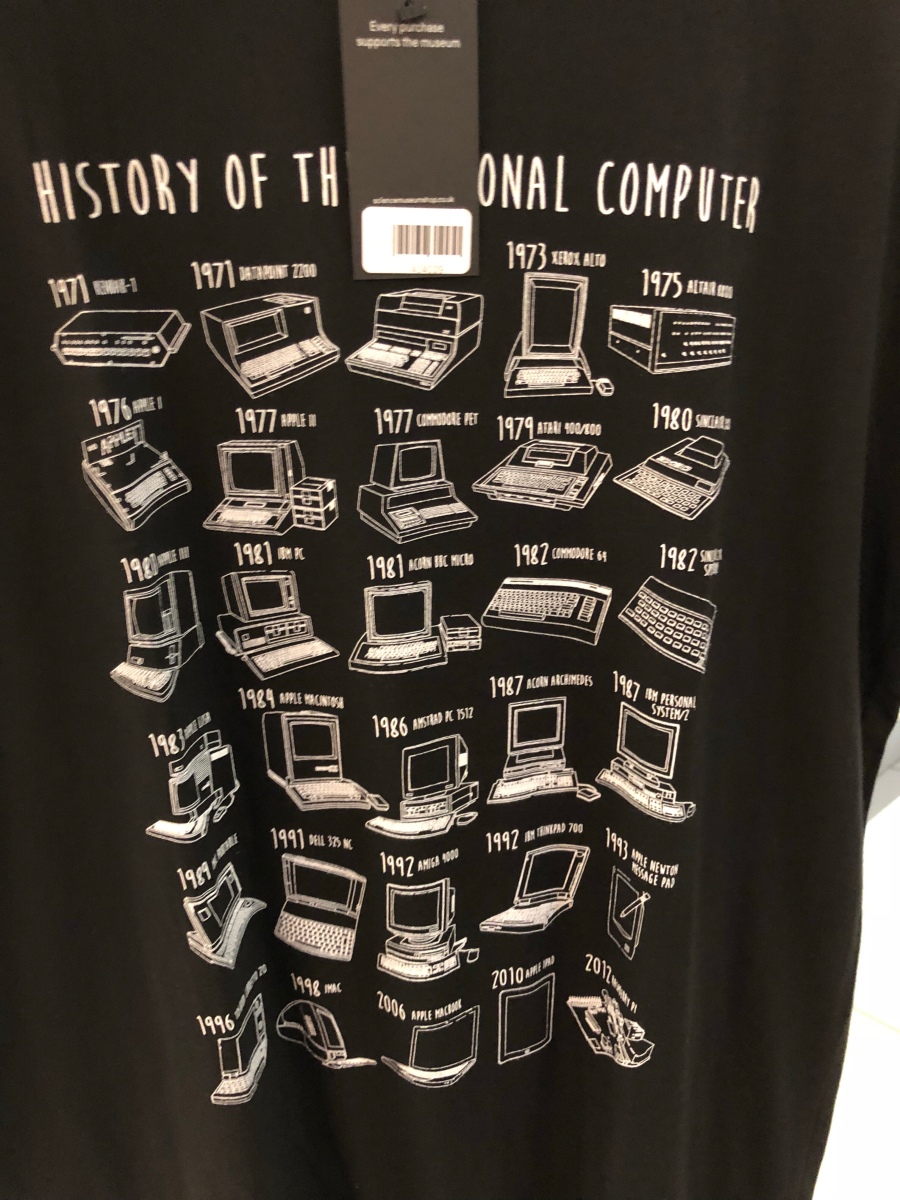 After the science museum we headed over to the Guildhall to look at the underground Roman amphitheater they discovered, and again entry was completely free. Our day only cost us breakfast, lunch and a few tube rides.

Lunch was a few sandwiches and salads we bought at Tesco and at in the shade on the grounds of the Guildhall. 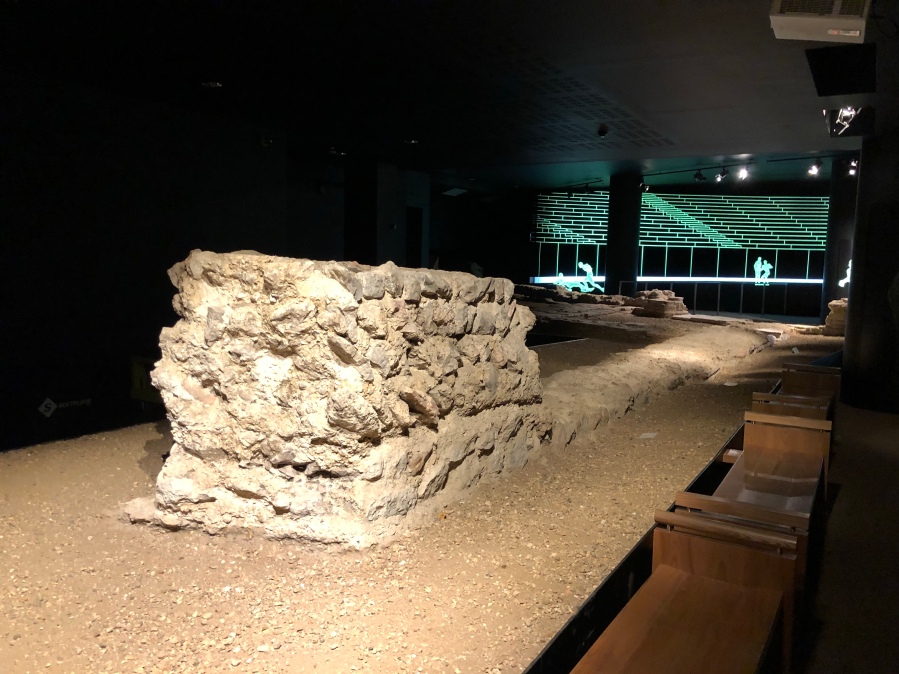 After checking this out, we tubed it back to the hotel, picked up our luggage and took the Heathrow express out to the airport. Sharon and Emma were departing from terminal 3 and I terminal 2. After helping Sharon and Emma checking in and saying our goodbyes I headed to terminal 2. I was through checkin and security in record time of about 5 minutes to discover my flight is delayed about an hour. C’est la vie…. at least it’s giving me time a plenty to write this blog post.

One positive about Terminal 2 is I found a place that does decent coffee. About a 7/10. Not bad for an airport

I’m now at the gate waiting for my flight to start boarding after a bit of a delay. Next post will be from Denmark. Home of Hygge and LEGO !